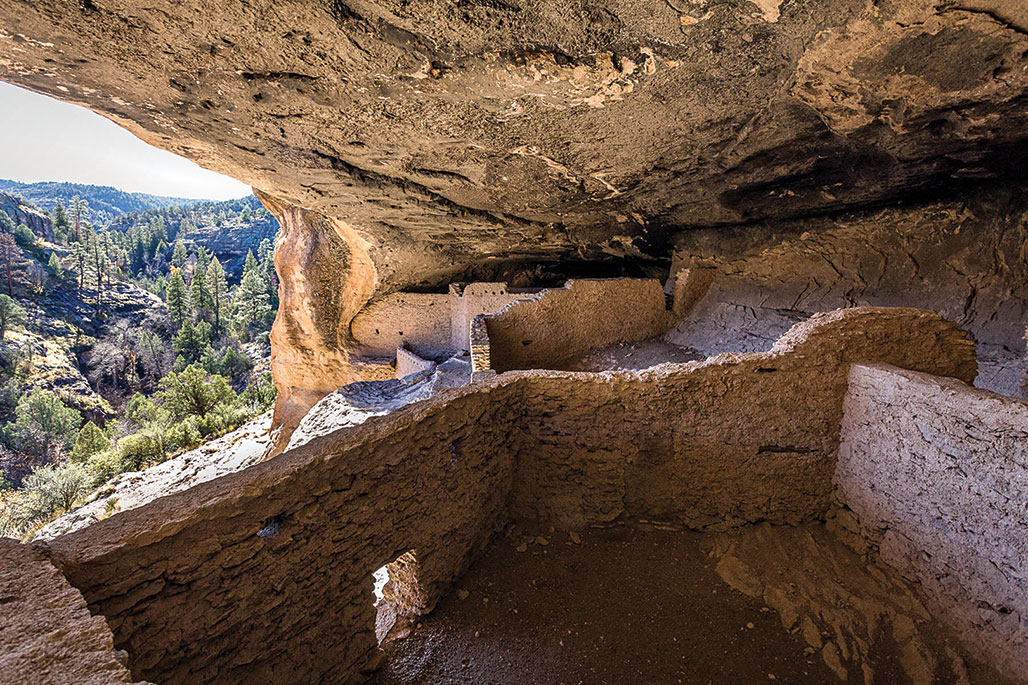 The Southwest New Mexico Tour sponsored by the Friends of the SaddleBrooke Libraries will explore the unique character of southern New Mexico. The five day, four night bus tour will be from Saturday, March 28 through Wednesday, April 1, 2015.

The first destination is Silver City by luxury motor coach. Silver City was founded to support local mining, originally silver and gold and now copper. It is also an important arts community. After lunch we will tour the Silver City Museum and the historic downtown. There will be ample free time to browse the many galleries and unique shops. Dinner will be at the Bear Mountain Lodge before retiring to the Holiday Inn Express.

We travel the Trail of the Mountain Spirits National Scenic Byway to Gila Cliff Dwellings National Monument. The history of the Mimbres Valley will be described by an expert guide. A ranger will lead a one mile loop to ancient ruins built by the Mogollon people in the fifteenth century along the Gila River.

The tour will drive to Las Cruces, stopping at the City of Rocks State Park where a Park Ranger will explain the origin of the rock formations and the Chihuahuan Desert. Then on to Mesilla on the Rio Grande River and a very special tour of the J. Paul Taylor Home before dining at the Double Eagle Restaurant. We’ll stay at Hotel Encanto de Las Cruces

Lunch will be at Rebecca’s in Cloudcroft followed by White Sands National Monument. Dinner will be at De La Vega’s Pecan Grill back in Las Cruces.

The tour will conclude on the fifth day at the Las Cruces Museum of Art and the Museum of Nature and Science in downtown Las Cruces. Our final stop will be at the amazing Adobe Deli in Deming for lunch.

You won’t want to miss this exciting tour of southwest New Mexico. You will be immersed in the history and culture of the region from prehistoric Indians to Spanish exploration and the development of modern day space exploration. The scenery varies from the stark Chihuahuan Desert to pine covered mountains and the white gypsum dunes of the Tularosa basin. All of this will be interpreted by local expert guides to give you a richer understanding of the region.

The transportation for the tour is a 56 passenger luxury motor coach equipped with a restroom. The price of the tour is $950 per person, double occupancy. All meals are included. Make reservations by contacting Barry Swartzberg at 520-825-0463 or by email [email protected] Please visit Friends of the Libraries (FSL) website www.FriendsSBLib.org for upcoming events, current information and unanticipated event changes

Can Phoenix, Arizona, claim a real murderess? What happened on the night of October 16, 1931? Who was the Blonde Butcher? Did Winnie Ruth Judd kill her two roommates? What was the motive?

On October 16, 1931, two women were killed with a .25 caliber handgun. Two days after the murders, Judd boarded a passenger train from Phoenix‘s Union Station with two large trunks. She traveled overnight to Los Angeles. When she arrived in Los Angeles, the station personnel were suspicious of the trunks because of the foul smell and the fluids leaking from them. According to prosecutors, Judd and an accomplice dismembered the body of one of the women and stuffed the head, torso and lower legs into a black shipping trunk, placing the upper legs in a beige valise and hatbox. The other victim’s body was stuffed intact into a second shipping trunk. Judd left the trunks at the station and was picked up by her brother. She hid out until she surrendered to police on October 23, 1931. The murder was reported in headlines across the country and Judd came to be referred to in the press as Tiger Woman or the Blonde Butcher but eventually the case became known as The Trunk Murders. Her trial was marked by sensationalized newspaper coverage and suspicious circumstances; the sentence she received raised debate about capital punishment.

If you are curious about the details of this murder mystery be sure to attend the Friends of the SaddleBrooke Libraries February monthly lecture by Jim Turner. Jim Turner began his love affair with Arizona when he moved here with his family in 1951. His family traveled to all the unique sites of Arizona. This began his fascination with Arizona history. He taught Arizona History at Canyon del Oro High School. He continued to study Arizona’s past over the years and began his lectures in 1998. He taught Arizona’s History as an adjunct professor for the University of Arizona. In 2001 he began his career as historian for the Arizona Historical Society. Jim Turner, recently retired from the Arizona Historical Society, is a professional Arizona historian, author and public speaker whose talks both educate and entertain a range of audiences. His range of knowledge and informative talks also include broader subjects such as Southwestern and Mexican history. Many of Jim’s talks include historic images and photographs in PowerPoint presentations.

Winnie Ruth Judd The Trunk Murderess lecture will take place on Thursday, February 19 at the MountainView Ballroom from 4:00 to 5:00 p.m. There will be a $5 fee for all non-FSL members. 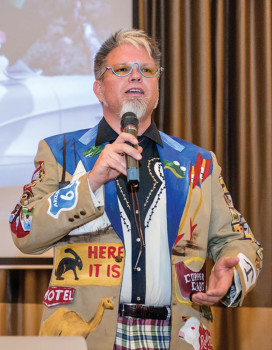 Kicking off the season on  Route 66

On January 15 Friends of SaddleBrooke Libraries held its annual kickoff with a very interesting lecture by Marshall Shore, the Hip Historian of Arizona. Borrowed from his touring as a sought after speaker, Mr. shore presented a delightful and highly informative slide show while lecturing about the history, sights and sounds of our nationally famous Route 66. The program was entitled Arizona Kicks on Route 66. His entire program was a kick.

Slides truthfully depicted the original road as a rough dirt path through desert towns hidden deep in the western cactus. Gradually, with the help of multi-media presentations, the fabled road took on the characteristics that made it famous in film and television.

The crowded ballroom at the MountainView Clubhouse applauded the interesting lecture and then welcomed Sherry Kaplan’s drawing that included dining at popular locations as well as souvenir maps.

If you missed this entertaining event, plan to attend FSL’s next lecture by Jim Turner, author of Winnie Ruth Judd, The Trunk Murderess, a fascinating Arizona story. It will be held on February 19. Watch our website for more information.

Friends of SaddleBrooke Libraries buys the books that you read through our SaddleBrooke libraries—your membership counts. 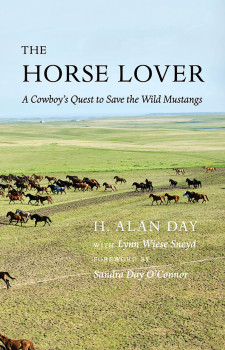 The Horse Lover, A Cowboy’s Quest to Save the Wild Mustangs

The Friends of SaddleBrooke Libraries’ next author luncheon is Monday, March 16. Tickets are on sale now at the HOA 2 Administration Annex for $29. Storyteller and rancher H. Alan Day and writing expert co-author Lynn Wiese Sneyd will be the featured speakers. Together they co-authored The Horse Lover: A Cowboy’s Quest to Save the Wild Mustangs.

Author luncheon co-chairs Elaine Kienitz and Judy Kany attended an Oro Valley Library presentation by the co-authors and were delighted. Day has great stories to tell with his experiences running three large ranches and growing up on the 200,000 acre Lazy B Ranch that straddles the Arizona-New Mexico border. He and his sister, Supreme Court Justice Sandra Day O’Connor, co-authored Lazy B about their upbringing on the remote cattle ranch.

The Horse Lover was published just last March and tells the intimate story of H. Alan Day’s experiences buying a 35,000 acre ranch in South Dakota to serve as a sanctuary for 1,500 wild horses deemed unadoptable. He called it Mustang Meadow Ranch and persuaded the government to stop warehousing the mustangs and let him attempt his horse whisperer’s dream of successfully using a herd-modification program to improve the life and behavioral health of the mustangs. This became the first government-sponsored wild horse sanctuary in the United States. This is a heartfelt memoir of a lifelong cowboy that deeply cares about all horses and tells about the adventures with some of his favorites as well as describing the joys and frustrations of balancing government requirements with the needs of wild mustangs.

Friends of the SaddleBrooke Libraries is pleased to present our own SaddleBrooke resident Barbara Carter as she portrays Elizabeth Van Lew. Barbara will give you a first person account, in period dress, of Elizabeth Van Lew’s life as the Union spymaster in Richmond during the Civil War period. If you are curious about the details of this masterful spy be sure to attend the Friends of the SaddleBrooke Libraries’ 4:00 p.m. Thursday, March 19 monthly lecture at the MountainView Ballroom.

Elizabeth Van Lew was a seemingly harmless spinster and resident of Richmond, Virginia, but she deeply opposed slavery. She joined the battle between the states as a spymaster for the Union Army. Richmond was not only the capitol of the Confederacy, it was the center of production for most of the Confederacy war materials and it was believed if Richmond could be captured the Civil War would end. How she organized her spy ring and what information she was able to pass to the Union forces is the fascinating tale our own Barbara Carter will tell. Barbara is a retired college professor who has taught her Rebels with a Cause class for the ILR. She makes all of her own costumes which greatly add to the authenticity of her performance.

Barbara is a 14 year resident of SaddleBrooke and is a retired professor appearing in Who’s Who in American Education. She has taught her Rebels without a Cause class for Institute for Learning (ILR) for SaddleBrooke residents and the University of Arizona’s Osher Lifelong Learning Institute (OLLI) program. She is currently writing a new course titled Dial C for Civil War Cabals, Camp Life, Cherokees, Choctaws and Creeks, Complicity, Conspiracy and Currency which should be available in the fall of 2015 for ILR. Barbara creates all of her own costumes which make her presentations even more authentic.

Please note lecture event change of day and time for 2015. The monthly FSL lectures will be on Thursdays at 4:00 p.m. and in the MountainView Ballroom.

Elizabeth Van Lew Civil War Spymaster lecture will take place on Thursday, March 19 at the MountainView Ballroom from 4:00 to 5:00 p.m. There will be a $5 fee for all non-FSL members