Can Phoenix, Arizona, claim a real murderess? What happened on the night of October 16, 1931? Who was the Blonde Butcher? Did Winnie Ruth Judd kill her two roommates? What was the motive?

On October 16, 1931, two women were killed with a .25 caliber handgun. Two days after the murders, Judd boarded a passenger train from Phoenix‘s Union Station with two large trunks. She traveled overnight to Los Angeles. When she arrived in Los Angeles, the station personnel were suspicious of the trunks because of the foul smell and the fluids leaking from them. According to prosecutors, Judd and an accomplice dismembered the body of one of the women and stuffed the head, torso and lower legs into a black shipping trunk, placing the upper legs in a beige valise and hatbox. The other victim’s body was stuffed intact into a second shipping trunk. Judd left the trunks at the station and was picked up by her brother. She hid out until she surrendered to police on October 23, 1931. The murder was reported in headlines across the country and Judd came to be referred to in the press as Tiger Woman, or the Blonde Butcher but eventually the case became known as The Trunk Murders. Her trial was marked by sensationalized newspaper coverage and suspicious circumstances; the sentence she received raised debate about capital punishment.

If you are curious about the details of this murder mystery be sure to attend the Friends of the SaddleBrooke Libraries February monthly lecture by Jim Turner. Jim Turner began his love affair with Arizona when he moved here with his family in 1951. His family traveled to all the unique sites of Arizona. This began his fascination with Arizona history. He taught Arizona History at Canyon del Oro High School. He continued to study Arizona’s past over the years and began his lectures in 1998. He taught Arizona’s history as an adjunct professor for the University of Arizona. In 2001 he began his career as historian for the Arizona Historical Society. Jim Turner, recently retired from the Arizona Historical Society, is a professional Arizona historian, author and public speaker whose talks both educate and entertain a range of audiences. His range of knowledge and informative talks also include broader subjects such as Southwestern and Mexican history. Many of Jim’s talks include historic images and photographs in PowerPoint presentations.

Winnie Ruth Judd The Trunk Murderess lecture will take place on Thursday, February 19 at the MountainView Ballroom from 4:00 to 5:00 p.m. There will be a $5 fee for all non-FSL members. 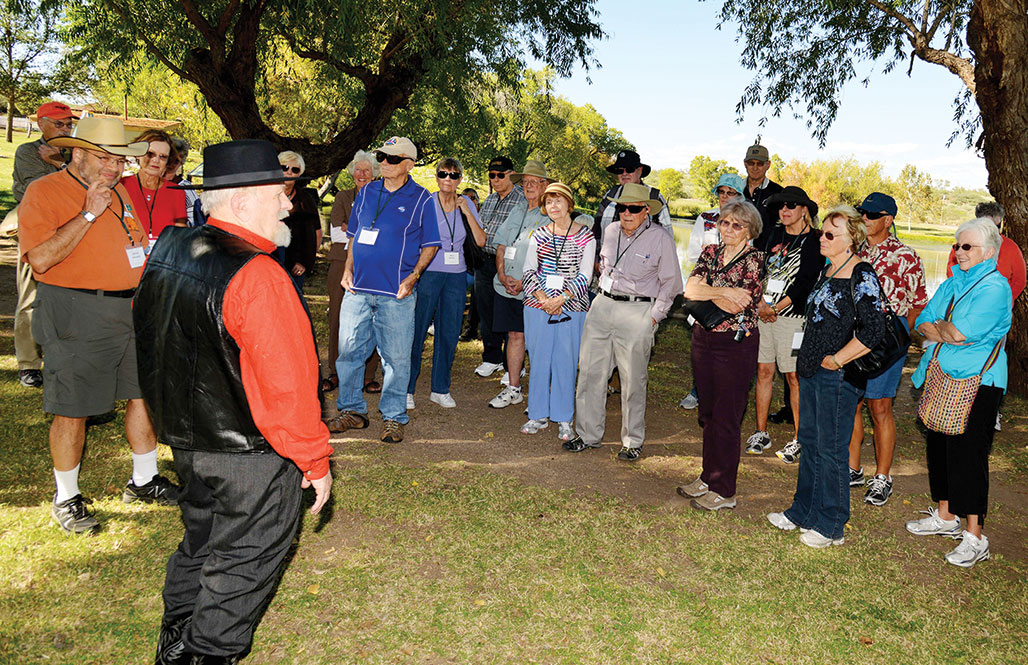 A good time was had by our 56 Friends of the SaddleBrooke Libraries with a bus trip to the John Slaughter Ranch on Saturday, October 18, 2014. Gerry Miller told us how John Slaughter, the former Sherriff of Tombstone, Arizona, was considered one of the most important men in obtaining statehood for Arizona since he got rid of so many outlaws and criminals. Arizona up to that point was considered too lawless to become a state.

First stop was the Courthouse in Tombstone where we saw the area where John’s office had been and the gallows where evil doers were dealt with. From there we had a wonderful lunch in the magnificent lobby of the historic Gadsden Hotel. Then it was on to John Slaughter’s ranch which is within shouting distance of the Mexican border. We saw several border control vehicles along the unpaved Geronimo Trail which leads to the ranch.

John Slaughter himself met us at the ranch and told us about his life and showed us his home and how he and his wife and family lived for many years.

Tired, but happy, we returned to SaddleBrooke at 7:30 p.m. having had an exciting and full day of fun and learning. Thanks again to Gerry Miller for his extensive knowledge and for allowing us to meet his friend and famous former lawman, Sherriff John Slaughter.

The Friends of the SaddleBrooke Libraries (FSL) is a wonderful organization dedicated to keeping the SaddleBrooke Libraries funded so we can continue to enjoy the newest best sellers, favorite authors, audiobooks, DVDs, large print books and the popular Lecture Series as well as Meeting the Author luncheons. In order for this organization to continue we must rely on our hard working volunteers. For the last 13 years we have been blessed to have had talented and dedicated volunteers to assist in our efforts.

As of January 2015 there will be three Board of Directors opening for three positions: Special Events, Public Relations Chairs and Member-At-Large.

If you have any interest in any of these positions, please contact Barry Swartzberg, vice president FSL, at [email protected] We thank you for your continued support of the Friends of the SaddleBrooke Libraries.

The Friends of the SaddleBrooke Libraries (FSL) annual Membership Kick-off event in conjunction with the Friends Lecture Series is scheduled for Thursday, January 15, 2015, in the MountainView Ballroom. The lecture will begin at 4:00 p.m. Marshall Shore, a vibrant speaker known as Arizona’s Hip Historian, will present Arizona Kicks on Route 66.

In his lecture, Marshall Shore will share his passion of uncovering the weird, the wonderful and the obscure treasures from our past: the semi-forgotten people, places and events that have made us who we are today. Shore uses storytelling magic, found film footage, old photographs, ephemera and artifacts to bring our state’s heritage to life in entertaining and educational presentations.

U.S. Route 66, known as the Mother Road, was built in 1926. It ran from Chicago to Los Angeles. During the depression of the 1930s, it became the major path by which people migrated west seeking work, warm weather and new opportunities. Shore shares the history of Route 66 in Arizona, including the impact it had on the state during its prime and what happened when the interstate ultimately bypassed some of the towns that drew life from the road. This multi-media presentation includes music, video clips, still photos and Shore’s storytelling magic.

This event kicks off the 2015 membership drive that provides needed funding for our three libraries. Thanks to your generous contributions, FSL is able to provide nearly 100% of the funding for new books, audio books and videos for our three libraries. Areas of particular focus this past year were the video collection at DesertView, expansion of the large print collection at the Cholla Library, ongoing funding for the special audio book cases for DesertView library, purchase of new paperbacks in several areas for the SaddleBrooke Library collection and the magazine subscriptions for the Cholla Library. In 2014 FSL has also funded printing of new bookmarks for the libraries, partial support for the launch of the library’s new catalog system and purchase of a book cart for the Cholla Library at MountainView.

The annual membership renewal date is January 1. The 2015 membership application will be available on the FSL website mid-December in all three libraries. On the web please click more details and membership form under the January 15 Marshall Shore program description.

Please note: lecture event change of day and time for 2015. The monthly FSL lectures will be on Thursdays at 4:00 p.m. and in the MountainView Ballroom.

This is a free lecture and is almost always filled to capacity. Lectures that do not require the fee have been underwritten through a grant from the Arizona Arts and Humanities.

So mark your calendars now and join us for an entertaining and informative event packed with fascinating details and door prizes, too!

The fall trip of the Friends of the SaddleBrooke Libraries proved to be an exciting adventure. Everyone prepared for a great trip; but, instead, (according to feedback from those who were on-board for the week’s excursion) everyone had an outstanding trip!

The trip organizer, leader and docent was Jim Cowlin, in collaboration with his spouse, Barbara Kemp Cowlin and Barry Swartzberg, Vice President of the Friends of the SaddleBrooke Libraries.

The first portion of the trip was a two-night stay at the rustic Grand Canyon Lodge, located at the North Rim. A tour of the Grand Canyon North Rim with a Grand Canyon Field Institute Guide was conducted the first full day of the trip. Breath-taking views surround the North Rim which sits atop the Kaibab Plateau at an elevation of 8,000 to 9,000 feet above sea level.

Following Pipe Spring the bus was on to a thrilling trip over and around various mountains and rock formations for its descent to the Zion Lodge located in Zion National Park, Utah.

Zion National Park Lodge is situated in a canyon carved into the Colorado Plateau. The lodge maintains a balance between environment and ecology, and has, since 2010, reduced water, electricity and petroleum consumption at the lodge. The lodge also serves sustainable, locally grown foods in its employee dining room, as well as fresh herbs in the guest restaurant.

The final leg of the trip was a stay at Bryce Canyon National Park, which is located in the high plateau regions of the Colorado Plateau in Utah. Limestone, siltstone, dolomite and mudstone combine to form the Claron Formation. Because each rock type erodes at different rates this causes the beautiful and breathtaking undulating shapes in Bryce Canyon. Many of those on the trip hiked into the Canyon.

The fall Friends of the SaddleBrooke Libraries bus tour was spectacular – for all of the beauty of the nature that was seen, in the uniqueness of each lodging accommodation that had been arranged, and in the friendliness of the leaders/docents, as well as the camaraderie of those who were on the trip. So, pack your bags! Get ready for the next Friends of the SaddleBrooke Libraries bus tours in spring and fall 2015.