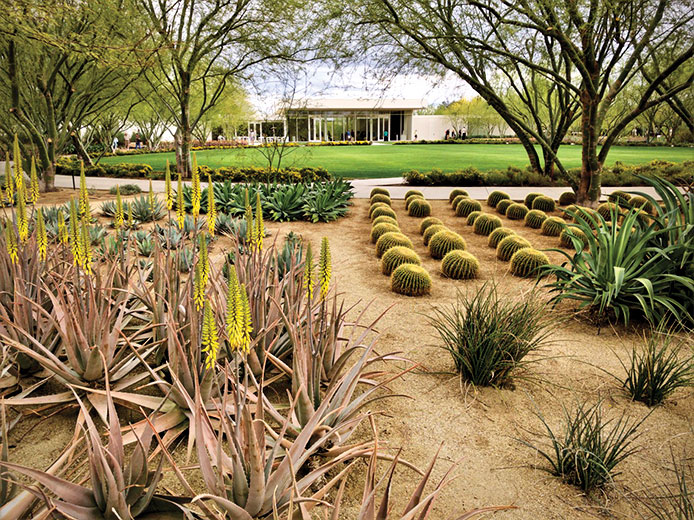 Two iconic locations are the featured destinations on a seven-day/six-night bus tour to California sponsored by the Friends of SaddleBrooke Libraries. The tour will be on March 20-26, 2019.

First up are two nights in Palm Springs, the legendary home of Hollywood movie stars.

The adventure begins on the Aerial Tramway up Mount San Jacinto and dining in the Peaks Restaurant. The Palm Mountain Resort in the heart of Palm Springs will provide easy access to all of the town’s amenities.

The second day will begin on a tour of Palm Springs and the Coachella Valley with a local guide narrating the history and culture of the region. The tour will include everything from midcentury modern architecture to wind energy generation and a rest stop at a date farm.

After lunch the tour will visit the gardens at Sunnylands, the former home of Ambassadors Leonor and Walter Annenberg who hosted many Presidential summit meetings. The day will conclude with time to enjoy the Palm Springs VillageFest with over 200 booths offering art, handcrafted items and unique food.

Day three will be a travel day from Palm Springs to Death Valley. Stops in Joshua Tree National Park and the Mojave Desert Preserve will provide an opportunity to learn about the characteristic flora and fauna of the Mojave Desert.

While Death Valley is the lowest and hottest place in America, March is the perfect time to be there. Temperatures are comparatively mild with an average high of 82 degrees and low of 55 degrees. If conditions are right, there may be a spectacular wildflower display.

The accommodation in Death Valley is The Ranch in Furnace Creek. Each room has a patio opening on to a grass lawn and easy access to the spring-fed swimming pool.

The Ranch includes the brand-new Town Square with a restaurant, shops and The Last Kind Word Saloon.

On the first day in Death Valley an expert on the valley’s history and geology will lead a tour of the upper valley. Stops will include Ubehebe Crater, Devil’s Cornfield, Mesquite Sand Dunes and Salt Creek. Lunch will be at the Badwater Saloon in historic Stovepipe Wells.

The second day in Death Valley will feature a tour of the area around Furnace Creek in the morning including Badwater, Devil’s Golf Course and Zabriskie Point. The afternoon will be free time to enjoy the facilities at The Ranch. Or choose from optional activities such as a jeep tour to Death Valley’s back country, a hike into Golden Canyon and photography instruction with James Cowlin. The tour will conclude with a special dinner at The Inn at Death Valley’s four-diamond restaurant.

The last night of the tour will be at the Golden Nugget in Laughlin. The day will start with a tour of the Amargosa Opera House followed by lunch at the Pioneer Saloon in Goodsprings. The day will end with a dinner cruise on the Colorado River.

The journey to SaddleBrooke will be celebrated with a final luncheon at Rancho de los Caballeros in Wickenburg.

Those who want to register for the trip should visit the FSL website, sbfsl.org, to download a registration form and trip itinerary. 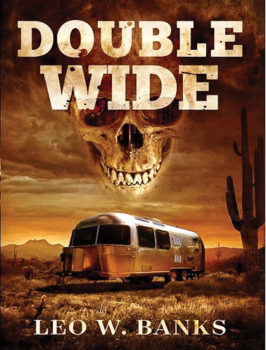 Banks graduated from Boston College and earned a master’s degree from the University of Arizona, where he later taught writing. His articles have appeared in USA Today, Newsday, Miami Herald, National Review, National Geographic Traveler, Sports Illustrated, Wall Street Journal and many others. He has been a correspondent for the Los Angeles Times and the Boston Globe. Double Wide is his first novel.

If you haven’t visited the award-winning Arizona Copper Art Museum in Clarkdale, Arizona you should make sure it’s put on your To-Do List for future excursions. This was a destination on a Friends of SaddleBrooke Libraries sponsored Tour and everyone on the tour came away with the same impression. This was one of the most wonderful museums we have ever visited! Besides winning the 2014 Arizona Governor’s Tourism Award, the museum has rocketed to the top one percent of 4,500 attractions in Arizona and rates within the top one percent of 35,000 museums nationally.

On Thursday, November 15 at 4:00 p.m. in the MountainView Ballroom, you will have the opportunity to meet Drake Meinke, one of the founders of the Museum and learn about how the museum was established. Drake will be bringing along some artifacts from the collections for viewing, which includes a Military Art Collection known as Trench Art, a form of art made by soldiers in the trenches of World War I and II from shell casings.

The Arizona Copper Art Museum originated from a simple spark. In 1958, John and Patricia Meinke of Minnesota saw in an antique shop several copper molds that captivated them. Later, Pat opened a small antique shop which kickstarted the massive collection that is today displayed in this museum.

The shop eventually closed in favor of selling copperware at antique shows, primarily in large cities throughout the U.S.A.; copper items were mostly obtained in Europe. In 1978, son, Drake, joined the business and started his own collection.

Over the years, both collections grew in size and prominence and the family envisioned sharing these acquisitions with the public. A museum concept then evolved with a focus of connecting to an appropriate community which had a foundation built around copper. Thus, the artifacts would make a nostalgic impact and a significant museum would be realized.

The founders, Pat and Drake, then contributed all resources necessary for the museum’s establishment. The two existing collections and the idea provided the basis of the museum.

A two-year survey was conducted to find the best location within the U.S.A. for a museum of copper art. Since the museum had to connect to its location, copper producing states were contenders. Arizona, nicknamed the Copper State, was easily chosen being the largest copper producer in the nation.

Copper is the oldest and one of the most important metals in the world. It has been at our side since civilization began and has helped us thrive at every step of human history. It was used in almost everything, and this museum’s collection stands as the evidence.

There are over 5,000 pieces in the current collections, including historical information, art and architecture, kitchenware, drinkware, distillery and winery and military art (Trench Art).

This lecture is free to Friends of SaddleBrooke Libraries members and there will be a $5 charge for non-FSL members.