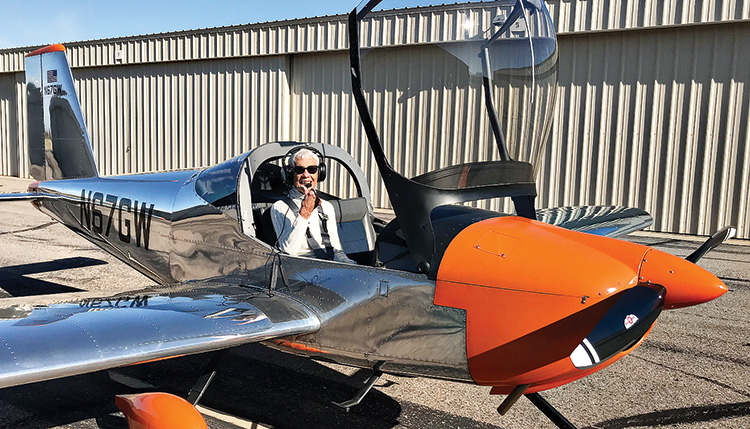 As a young girl growing up in Brooklyn and Rochester, NY, Janet Schmidt dreamed of being a pilot. She recalls that her options seemed to be limited to being a nurse or teacher. Pilot just didn’t seem an option for a girl in those days. Janet moved to SaddleBrooke in 1998 with her late husband, Norman. Her daughter, Maren Seidler, a successful Realtor with Long Realty, had arrived in SaddleBrooke from California the year before.

At the recent Oracle Schools fundraising dinner, an item came up for bid during the live auction which caught Maren’s attention. SaddleBrooke resident and EAA pilot, Gary Wood, was offering a “Wings Over SaddleBrooke” flight in his 2-seater Van’s RV-12 aircraft to a lucky bidder. Maren saw an opportunity to give her mother something special, something she knew Janet would love. As the auction began, Maren quickly found herself in a spirited bidding war with two other determined attendees. Dueling paddles flashed as the bids went up, and up, and up. “I did not want to walk away without that flight for her and it was a great way to support the pre-kindergarten program.” Finally, after much back-and-forth, the bidding concluded, the Oracle Schools fundraising committee was thrilled, and Janet would learn the next morning that she was going to be taking a trip!

Janet redeemed her flight on New Year’s Day, a crisp and perfect morning. Gary picked Janet up in his Tesla Model 3. “I don’t know which experience Janet was more excited about—the electric car ride or the airplane!” She and Gary took to the blue skies with puffy white clouds. Janet proved herself a competent co-pilot, taking the controls and performing maneuvers over the hills of the Ritz-Carlton, SaddleBrooke, Biosphere 2, Tiger Mine in San Manuel, SaddleBrooke Ranch, Picacho Peak, and a low pass over Pinal Airpark runway to see the huge fleet of retired 747s before returning to the hangar at Marana Regional Airport.

At 90 years of age, Janet nimbly climbed out of the cockpit and exclaimed, “I could not have picked a more perfect way to welcome the New Year and start a new decade!”