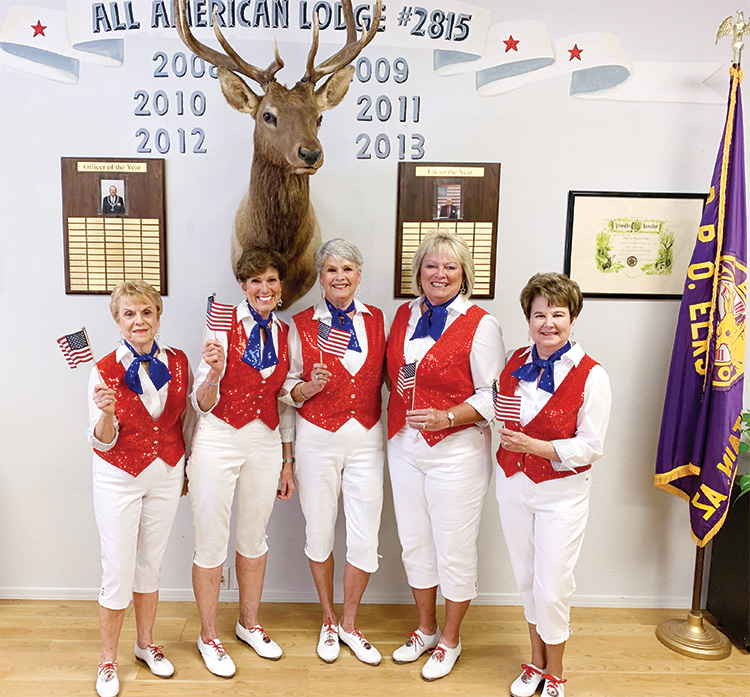 Past Exalted Ruler (PER), Larry Megahan, narrated the history of all the flags that have flown over our country as Lodge members presented each flag. The flag bearers were Leading Knight Monty Derting, Jan Trudeau, Treasurer Larry Valverde, Loyal Knight Alane Asp, Trustee Belinda Waller, Inner Guard Larry Wittenborn, PER Steve Asp and PER Tom Wilson.

Exalted Ruler Gloria Cisneros presented the story of the America Flag and its significance throughout history, followed by the singing of My Country ‘tis of Thee by PER Jim Cox.

Past District Deputy Grand Exalted Ruler, Jim Buell, gave an impressive presentation about the Battle of Trenton during the Revolutionary War using pictures projected on a television screen with the assistance of Kathy Buell.

PER Doug Harpold presented the salute to veterans and introduced the Coyote Country Cloggers who performed their version of “Stormin’ Norman,” songs representing all branches of military service. The audience sang God Bless the USA in honor of recently departed Norm Beasley who sang this song on Flag Day for many years in acknowledgment and gratitude for the dedication and service of law enforcement officers and firefighters. The ceremony closed with the Cloggers performing Patriotic Polka, a medley of spirited, patriotic songs.

Exalted Ruler, Gloria Cisneros, thanked PERs Jim Cox and Larry Megahan who co-chaired the event and all those who contributed to the success of the program. The Oro Valley American Legion Post 132 retired service-worn American Flags with dignity and respect following the ceremony.