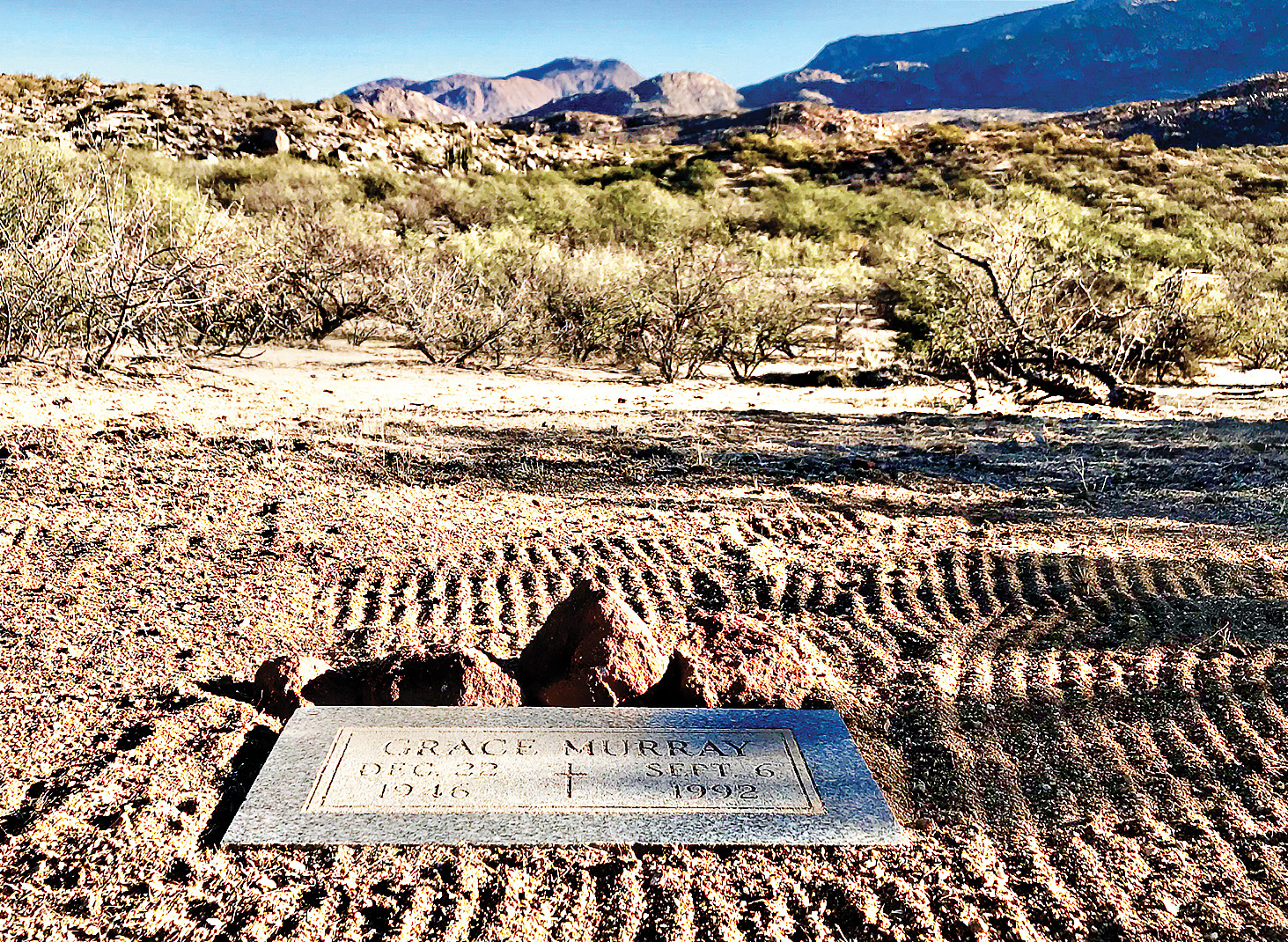 For years, hikers and equestrians have known of the gravestone of Grace Murray on a remote mound in the desert, east of Golder Ranch Road. When hiker Elisabeth Wheeler first observed the gravestone, it was illuminated by an early sunrise. To Elisabeth this moment felt sacred. She felt led to learn about and honor Grace, who died in 1992.

Fellow hiker Elissa Cochran discovered that Grace was the second oldest child of seven children born to Grace Miller of Brooklyn, N.Y. SaddleBrooke historian Bob Simpson found Grace’s death notice in the Sept. 9, 1992, Tucson Citizen indicating that she had been a nurse. The Citizen published a photo of Grace escorting a patient in a wheelchair from the University Medical Center. Bob contacted Grace’s sister-in-law in Catalina who said that Grace had been living in New Jersey with four children from her first marriage when she met and married Bob Murray. They moved to Catalina, Ariz. over 30 years ago where Grace continued nursing and Bob became a mechanic at the Golder Ranch Fire Department (GRFD). Bob’s uncle, Harry Deforest (Bob or Buck) Murray was the first Fire Chief of the Golder Ranch Fire District. His father, Leo Eugene Murray, was head of GRFD maintenance.

Grace was working at Tucson’s University Medical Center when a tumor was discovered in her lungs, and she died of lung cancer on Sept. 6, 1992. Because her favorite activity had been riding one of Leo’s horses, named Big Red, Leo Murray honored her wish that her ashes be placed near a trail in the desert. Some 17 years later, Grace’s husband Bob died on Veterans Day 2019, and requested that his ashes be placed with those of his wife, but by then no member of the family knew the location of Grace’s headstone. Bob Simpson told Grace’s sister-in-law that members of the SaddleBrooke Hiking Club knew the location and would be honored to assist.

After his mother’s death, Grace’s son Eugene joined the Navy, visited several countries, and then settled with his wife in Phoenix. He learned of the Hiking Club’s offer to place his step-father’s ashes. Guided by Elisabeth Wheeler and Bob Simpson, Eugene and his wife hiked to Grace’s headstone following auspiciously, a single rider on a red horse. Eugene related that his mother was a courageous and kind woman who would give anyone in need “the shirt off her back.” Working in the same hospital, Grace and Bob became the lovers for life. Grace’s children were grateful to have Bob as a loving step-father.

On Veterans Day, 2020, the story of “Finding Grace” reveals a life of courage, resilience, and love.