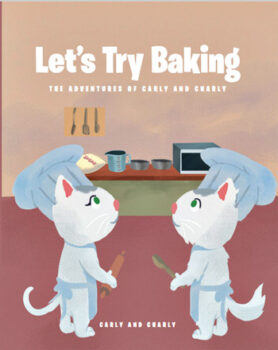 As SaddleBrooke authors, we set out to conquer the kitchen in our latest adventure, Let’s Try Baking. This fifth book in the series tells the story of how we decided on what to bake. It was difficult, because everything just sounded so yummy. And because we adventure cats started out hungry, it made it even harder to think.

As new bakers, we were careful to assemble all the ingredients and tools we needed before we began our work in earnest. We made a plan, selected a good recipe, and started stirring and blending, trying not to get fur in the mix. (Yuck!)

We’ve never cracked an egg before, so it was fun to watch Charly try. After we decided what to bake, we moved on to the design phase where our feline flair began to awaken. There was an intense rivalry as to who would create the best design. Yet it was hard to judge when everything turned out just fine.

As in all of our exploits, we faced this kitchen adventure confidently and bravely, because we know we’re very capable and talented cats. And what could possibly go wrong with cats baking? Join us in navigating our first purrfect indoor adventure to find out.

Let’s Try Baking is now available online and in the SaddleBrooke Gift Shop, along with our first four books: How It All Began, Let’s Go Boating, Let’s Play Tennis, and Let’s Play Pickleball. Pick one up for your grandkids.

And as a heads-up, Let’s Go Horseback Riding is slated for an early fall release. Stay tuned.