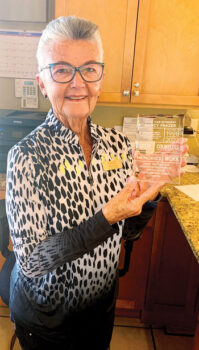 Yes, it is true that Nancy Frazer is leaving her position as lead tennis coordinator after 24 years! She has been such an asset to our tennis community from the very beginning.

Ed Robson had a vision to build a premier tennis facility at SaddleBrooke in 1987. In 1994 the construction began for our tennis clubhouse, and that is when the SaddleBrooke Tennis Club board was formed.

Nancy moved to SaddleBrooke in 1993. In 1994 she served for two years with President Gary Jenkins as the vice president on our first tennis board. Shirley Newman was our first coordinator. When Shirley stepped down as coordinator in 1998 to play more tennis, Nancy took her position and never looked back! She has been an outstanding employee, dedicated to her job for 24 years! She is a true historian of our club! Nancy and Shirley both played in U.S. Tennis Association leagues together, and Nancy still gets together once a month for lunch with some of the gals.

Nancy was born in Ohio. She moved to Phoenix where she lived for 12 years and learned the game of tennis. She loves living here and plans on getting back to playing more tennis. She enjoys her pool time at SaddleBrooke One, in case you have not noticed her beautiful tan! When asked what the best part of her job as coordinator was, she said, “the people!” When asked what the most difficult part of her job was, she said, “resolving the conflicts that come up.” Nancy survived the tennis clubhouse renovation three years ago, where she had to work in another area of SaddleBrooke One, and, recently, she had to learn the new computer software system. Nancy’s calm demeanor, flexibility, dependability, and professionalism while maintaining a sense of humor will be missed at the tennis office! We know she will enjoy her retirement—especially sleeping in!