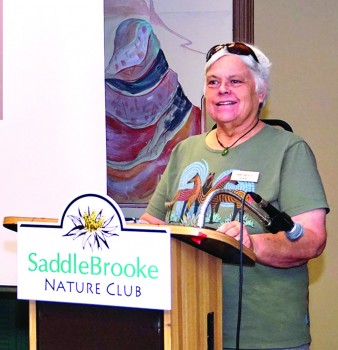 Just in time to think about what to serve for supper, SaddleBrooke Nature Club’s October speaker had many suggestions of food that has been right in our backyard for centuries!

Barb Carolus from Tohono Chul defined Ethnobotany as the scientific study of the relationship between plants and people. When we know the plants they grew and ate, there is much we can learn about those who came before us. At Tohono Chul they are especially interested in plants used by the Tohono O’odum and Hohokam Nations.

The park has an Ethnobotany garden to help learn, teach and preserve those plants so critical to our past residents.

Barb discussed the Columbian Exchange which was the export and import of goods from the New World to and from Europe. Those tomatoes so prominent in Italian cooking actually originated in the New World! Turkeys, pumpkins, sweet potatoes, corn and casaba were also New World gifts to Europe. In return Europe gave the new world farm animals, onions and much more.

For plants to survive in the desert they needed to be both drought and heat-tolerant. They also required a short growing season.

Some of those plants include:

Agave (Century Plant): The entire plant is useful from the leaves which provided fibers for weaving to the artichoke-type part at the bottom for eating. Natives knew about agave nectar long before its current popularity.

Barrel Cactus provides needles for sewing and hooks for fishing.

The fruit which has a lemon flavor makes jams and jellies.

Bear Grass was and is still used for weaving.

Creosote is like nature’s drugstore. Its leaves have both antiseptic and antibiotic properties.

Mesquite is like nature’s general store. The wood is great for building. The pods make flour. Tea for tummy aches can also be brewed from parts of the mesquite tree.

Other plants so critical to survival in the desert include Ocotillo, Prickly Pear, Yucca, Amaranth, Jojoba, Devil’s Claw and the mighty Saguaro.

Native Americans’ farming methods include both irrigation farming along the Gila and Salt Rivers and dry farming. Tohono Chul has excellent examples of dry farming where various methods are used to collect all available water. There you can see tepary, a bean prevalent in native food supply. Chitepin, chili (today’s chili ancestor) can be found on the Tohono Chul grounds as well. Corn and cotton, of course, along with squash, gourds and sunflowers are staples in the Tohono Chul ethno-garden.

As a follow-up to this presentation the SaddleBrooke Nature Club will be visiting Tohono Chul for more information about Ethnobotany.

Field trips and speakers are planned well into 2016. For information about membership or SaddleBrooke Nature Club visit the website www.SaddleBrookeNatureClub.com.