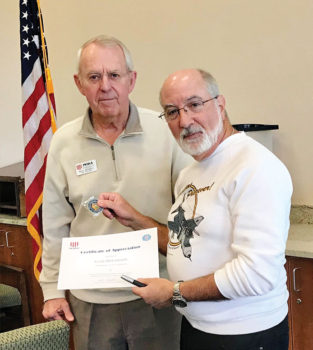 Lt Col Mark Schwartz took us back in time to the era just before the space age began, the mid 1950s. The US and USSR were both working to develop intercontinental ballistic missiles and space launch vehicles. During this time period, the U.S. periodically flew high altitude aircraft near the Soviet Union border in order to keep an eye on military developments. Occasionally one of these aircraft was shot down causing the U.S. to develop an alternative approach for getting this intelligence information.

President Eisenhower was concerned that we might be surprised by Soviet strategic missile developments and implemented a recommendation of the 1954 Killian panel – the need for the development of space-based reconnaissance capability to observe the Soviet missile programs from the relative safety of space. This was the Corona program to put an imaging camera into orbit, executed by the CIA and the AF under the code name Discoverer, at the time a highly classified program that was finally disclosed in 1995.

At the same time, the classified development of ballistic missiles was undertaken by the Army, Navy and Air Force under the guise of building space launch vehicles to lift the Explorer 1 satellite into orbit during the 1957 International Geophysical Year. So, once again, President Eisenhower was developing highly needed capabilities, in secret, to protect them from the Soviet Union.

All of this was in place when the Soviet Union launched Sputnik, a space-based ham radio in 1957. The US launched Explorer I early the following year as a scientific satellite, which led to the detection of the Van Allen radiation belts circling Earth. Even though the U.S. was second into space, it was a much more sophisticated accomplishment.

By 1959, the Corona program was successful in orbiting a photo reconnaissance satellite into orbit and the U.S. began deploying ballistic missiles as a major deterrent against the Soviet Union’s use of similar weapons.

Mark really brought home the urgency and challenges of these developments in a very exciting talk at our MOAA meeting on December 15, 2018. Many in the audience either remembered the events and/or had some connection with later evolutions of these capabilities.

The next Catalina Mountains Chapter of MOAA meeting will be held on Saturday, January 19, 2019 at 1130 in the Catalina Room of the Mesquite Grill. The speaker is Jerry Wilkerson, a former US Navy serviceman telling us about his experiences as a press spokesman for two U.S. Congressmen and giving us his insight on how things get done, or not, in Washington.

The Military Officers Association of America (MOAA) is a nonprofit veterans’ service association dedicated to maintaining a strong national defense and to preserve the earned entitlements of members of the uniformed services, their families and survivors.