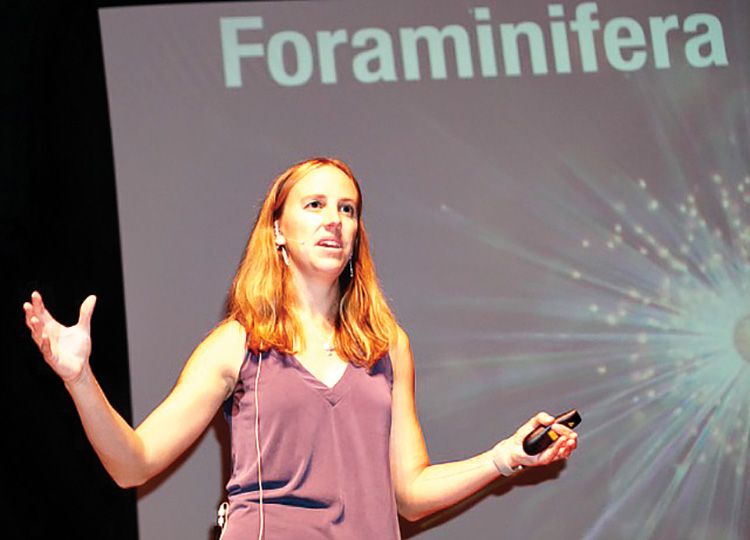 What a great turnout SaddleBrooke Nature Club had for its meeting in the Desert View Theater! Associate Professor Jessica Tierney spoke on the topic of climate change. Ms. Tierney is an associate professor in the Department of Geosciences at the U of A. She teaches organic geochemistry. Ms. Tierney holds an impressive number of research grants including four from the National Science Foundation with a total of over a million dollars.

Behind Ms. Tierney on screen was a world map animation by NASA showing the cycle of C02 going into the atmosphere and then being absorbed by plants. It demonstrated her opening statement, “We are facing a world of higher CO2”.

With photos the speaker illustrated different ways scientists can measure CO2 levels. Ice cores contain bubbles which have trapped the atmospheric composition going back to the 1740s. This data measures 315 parts of CO2 gas per million in 1958 growing to 410 currently.

Researchers found a way to measure back much further in time by taking cores of deep marine sediment (mud at the bottom of the ocean).

Trapped in the sediment are microfossils, pollen, and formaminifora which are tiny seed-like chemical properties. They can reveal temperatures and ocean chemistry even in pre-historic times.

Scientists did find a time when CO2 levels were higher than they are now. It was 2.5 million years ago. No cause has been established.

Volcanic activity is one of the possibilities. Others include melting permafrost and a sudden emission of methane clathrate.

Temperatures 3 degrees Fahrenheit higher and more acidic oceans were the results of higher C02 levels. The climate was steamy. There was no Greenland ice. There were unusual occurrences such as cold-blooded animals being able to live much further north. Pollen from palm trees was found in Antarctica.

The difference between the CO2 levels then and now is that the levels are going up much faster.

The presentation demonstrated the greenhouse effect showing the atmosphere trapping too much heat and sending it back to the earth. With this comes an increase in sea level due to the melting glaciers. Extreme weather events due to high temperature can be expected.

Associate Professor Tierney repeatedly stressed that the data is over millions of years. This increase of C02 is a very slow process.

She said there is still time to make choices. We can keep things as they are or we can mitigate the problem with aggressive action.

Ms. Tierney informed the audience that the U of A Tree Ring Lab is a great place to visit. Tree rings also give scientists information about past climate. The ocean in the biosphere shows the importance of coral in recording ocean chemistry and temperatures.

A new Climate Systems Center has just gone online. This is a group dedicated to climate change research and encouraging young scientists.

The SaddleBrooke Nature Club meets at 4:00 the second Monday. Most months the club meets in the MountainView Ballroom.