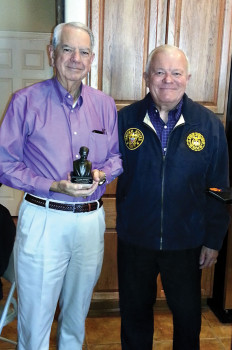 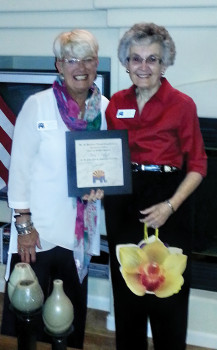 On Friday, January 23, SaddleBrooke and Eagle Crest Republican Precinct Committeemen honored Doris Clatanoff for her many years of leadership with a special breakfast meeting at the home of Marian DiPietro. Doris has stepped down as District Chair, but will remain a Precinct Committeeman.

She was presented with a framed certificate, signed by all PCs and a silver necklace–a reproduction wax seal, depicting an elephant representing the motto, “Reason is my strength.”

Also honored at the breakfast was Richard Hudgins, who was presented with a bust of Abraham Lincoln by Senator Al Melvin, recognizing his commitment to the SaddleBrooke Community and his work in organizing Town Hall meetings during the last election cycle.

The meeting also featured a Legislative Report, delivered by newly elected AZ Representative and SaddleBrooke resident Vince Leach, who told the group about the first bill enacted by the new Legislature, called the Civics Bill, which requires all high school students to correctly answer 60 of the 100 questions posed to applicants for U.S. citizenship to qualify for a high school diploma.