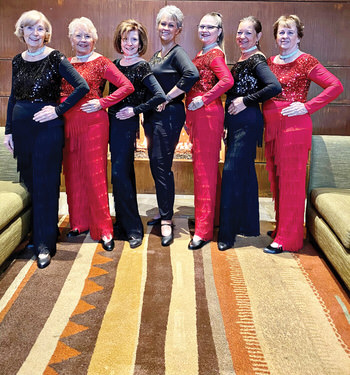 The SaddleBrooke SilverBelles performance dance team is an eclectic group of dancers of all ages, scanning four different decades, bringing in a wide array of talent. Our ages really don’t matter because we’re all young at heart, and we share a love of dance. Meet our 80-, 70-, 60-, and 50-somethings:

After moving to SaddleBrooke, Laurie Page and her husband, Sam, enjoyed social ballroom dancing. In the summer of 2013, Laurie had the exciting opportunity to be a member of the Crystal Belles, a training class for the SilverBelles performance dance group. In November of that year, she was thrilled to become a SilverBelle! Now in her ninth year, she loves performing for audiences, learning new dances, and perhaps the best thing of all, her warm, caring, and special friendship with all the other Belles.

Loretta Tom’s background in dancing includes lots of square dancing and a few native dances while in the Philippines. She performed the native dances for the international students at Ohio State University and attempted square dancing with her husband. Loretta’s dancing interest piqued when she watched the SilverBelles perform at the variety show. She is hooked and is now part of an enjoyable activity, dancing to music and kicking those heels!

Claudia Booth started dancing with her dad, standing on his feet when she was six. Her first debut performance at age 10 was a tap dance on a flatbed truck at the South Dakota State Fair. She continued dancing in high school and college with performance groups. She has been ballroom dancing for 20 years, with some teaching along the way. Her daughters and grandkids call her “The Dancing Queen” and expect her to keep dancing forever. Why not?

Ann Kurtz began ballet, tap, and acrobatics at age seven and participated in recitals and school plays. Inspired by her older sister, who was a dance professor, she started modern dance in college. As an adult, Ann returned to ballet and jazz and later started ballroom dancing with her husband, Tom. Ballroom has been a favorite activity for many years, with wonderful professional instructors, dance camps, competitions, and showcases. Ann has been a SilverBelle since 2003 and loves teaching and creating choreography for the group.

Caryl Mobley can’t remember a time when she didn’t love to dance. Ballroom and disco filled her high school years. By college, modern dance entranced her. After grad school, Caryl flirted with tap for several years. In SaddleBrooke, Caryl saw the SaddleBrooke Progress with photos and articles about the SilverBelles and couldn’t wait to try out for this performance dance team. The rest is history. Seventeen years later, dancing with the Belles is still the highlight of Caryl’s life here.

Tina Wrbanek has always loved music and loves to move to the music. Her father was the first one to show her how to dance and to dance with her. When Tina was 39, she received her first dance instruction, which was in round dancing (choreographed ballroom dancing). Along with her husband, John, she became a round dance leader in the Chicago area and later in Tucson. She has danced with the Clogging Desert Stars, as well as with the SaddleBrooke SilverBelles.

Tami Peterson joined the SilverBelles troupe for the fun and joy of dance. While she has had no formal dance training, she was a high school cheerleader and pom pom squad member. Tami grew up watching American Bandstand and fell in love with dance at an early age. She loves all kinds of music and dance, and she hopes to continue dancing for decades to come.

Michele Gildner’s dance career started at five years old when a gift from her grandmother, the album Meet the Beatles, encouraged her to learn The Twist, and interest grew from there with ballet classes for many years. Although decades away from those early dance lessons, her spot-on imitation of Mick Jagger singing “Shattered” (complete with platform shoes) wowed law school friends. She is a lovely and talented dancer.

Terri Mullin is the newest member of the SilverBelles. Her love for dance started as a young girl when she took tap, ballet, and acrobatics. Tap quickly became her favorite, and she has continued to tap dance off and on throughout the years. Since retiring, she has renewed her love of dance by learning and competing in ballroom dancing. Terri’s motto is, “A day without dancing won’t kill me, but why take the chance?”

Shaun Herndon was a nationally competitive baton twirler since age seven, and dance was incorporated within all the baton routines. Shaun remembers learning how to do a tour jeté from her first dance coach, aka dad, where he leapt so high he ripped his pants in the process. Ballet and gymnastic lessons followed. Shaun is thrilled to have found the SilverBelles to continue entertaining audiences. Every member of the SilverBelles is a role model and inspiration to Shaun.

Dancing through the decades isn’t just a cliché. No matter what our ages, dancing keeps us feeling young, and it certainly keeps us feeling alive. We love to entertain at community events, club luncheons, holiday celebrations, and group parties. To schedule a performance, contact Caryl Mobley at 630-698-2232 or [email protected]