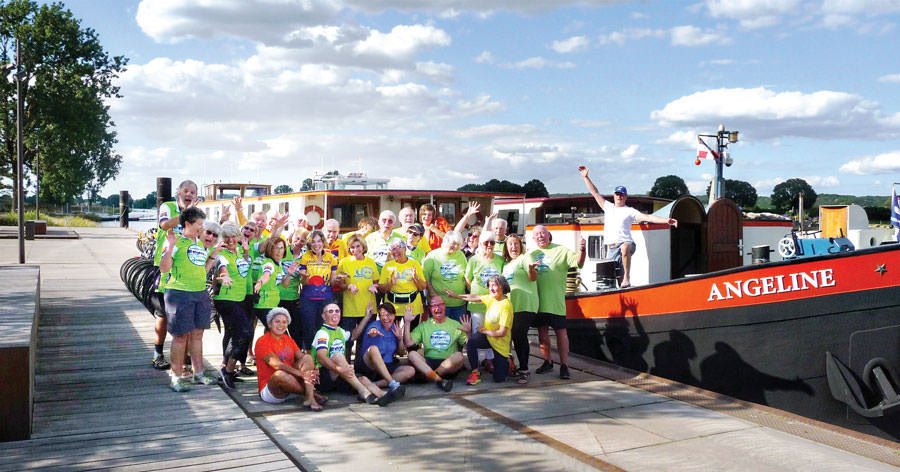 SaddleBrooke CycleMasters next to the Angeline.

Twenty-two SaddleBrooke CycleMasters spent 15 wonderful days on the Angeline barge for an unforgettable bike and barge trip through several countries’ waterways. Club member Gloria Belanger of Bon Voyage Travel did an outstanding job of arranging the trip through Bike & Barge Holland Tours. And for that, we can’t thank her enough. She provided bikes fitted to our dimensions, and we had several options for each day of the trip: a short, guided ride of about 30 miles, a longer 50-mile guided ride or simply stay on board the Angeline as she sailed to the next port to meet up with the cyclists.

The trip began in Amsterdam and we sailed through the towns of Vianen, Tiel, Nijmegen, Arcen, Roermond and Maastricht in the Netherlands, along the border with Germany for a bit and then through Kanne, Hasselt and Lier in Belgium to our final destination of Antwerp. We took in castles, gardens, national parks, World War II museums and cemeteries and limestone caves.

We were lucky that one of our guides was able to set up a special visit to the Norbertine Abbey in Tongerlo, Belgium, home to one of three replicas of Da Vinci’s Last Supper. (After much testing and analysis, it is believed that some of the painting of the replica was actually performed by Da Vinci.)

We rode on dikes and other dedicated bikeways along rivers and canals, through fields, pine forests, farmlands and charming villages, each one more picturesque than the last with fun stops along the way for cappuccinos, ice cream and beer. The two guides and crew of the Angeline were quickly embraced as honorary CycleMaster members and made the trip more fun and rewarding than we realized was possible. After spending two weeks together cycling the countryside and waterways of these European countries, it was a bittersweet farewell as the CycleMasters departed the Angeline in Antwerp, with happy memories and photos intact.

If you are interested in joining the fun experienced by the SaddleBrooke CycleMasters, check us out at saddlebrookecyclemasters.org and see what you might be missing.