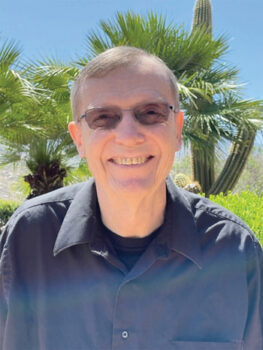 If you’ve ever attended a concert or theater performance and you couldn’t hear or understand what the performers were saying, you can appreciate the importance of quality sound. Creating a professional soundstage in which every voice is clearly understood is no simple matter—especially for senior audiences. It not only requires professional technology but a competent sound technician as well. Fortunately, Community Circle Players (CCP) has both in Denis Greenland. Seldom noticed in their black outfits at the side of the performance, both Denis and his lighting sidekick Alex Infald play a critical role in the success of every CCP performance.

Denis moved to SaddleBrooke from Virginia in 2008 where he worked as a civilian test engineer for the U.S. Army. As a new retiree in a new community, he volunteered to help build sets and operate the slide projector for Calendar Girls. A year later, when directors Susan Sterling and Shawne Cryderman realized they had an eager volunteer with an electrical engineering background, they enlisted him to work as the sound technician for Don’t Drink the Water.

Creating a professional soundstage requires top-level equipment on the stage, around the theater, and at the soundboard. The soundboard is an electrical panel covered with lights and switches that looks like it might belong in the cockpit of an airplane. Every microphone on stage is controlled by a switch on the soundboard, and each switch controls not just the power and volume of each actor’s mic, but also the high and low frequency loads that vary based on each actor’s voice. Putting all of this together results in the professional sound quality that CCP audiences have come to expect.

Denis’ job actually begins about two weeks before each opening. He attends rehearsals so he can capture, download, and edit any needed music and/or sound effects in a timely way, as required by the script. The week before opening night (Tech Week), Denis attends every daily rehearsal to evaluate the volume and sound frequency needs of each actor based on both his or her voice and the mic he or she has been assigned. Between rehearsals and performances, fresh batteries are placed in each microphone, and just prior to opening the house for audience members, a final mic check is done with each actor to evaluate if any last-minute sound adjustments are needed.

Creating a professional sound stage is not a simple process, but the results are readily apparent to everyone associated with live theater in SaddleBrooke. Next time you go to a CCP performance in SaddleBrooke, don’t take the quality sound for granted. Take a moment to appreciate the effort that went into bringing you the very best theater experience possible.