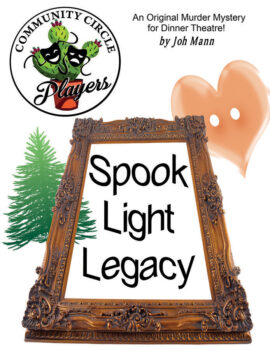 Spook Light Legacy, Community Circle Players’ (CCP) March 25 through 31, 2023, dinner theatre production, is filled with murder, mystery, and mayhem. Joh Mann’s delightful script, with some SaddleBrooke tweaks, is CCP’s theatrical version of March madness. Expect some spooky shenanigans, intermissions for dinner and dessert, and chances for the cast to engage and offer clues to help the audience figure out “Who done it?”

Auditions will be held Jan. 3 and 4, 2023, in MountainView Ballroom West for the five male roles and six female roles in the cast of Spook Light Legacy. Plan to attend both days if you can. Rehearsals are 10 a.m. to 1 p.m. on Mondays, Tuesdays, and Thursdays. The first rehearsal is on Jan. 5.

CCP is always looking for additional people to assist with props, PR, costumes, and behind-the-scenes technical support. Those interested in helping backstage or with the technical aspect of the theatre, like lighting or sound, are encouraged to become part of the production and attend auditions.

The show takes place in the lobby of a dilapidated hotel whose elderly innkeepers, the Goodrests, are trying to determine which of their two ingrate children is most qualified to inherit the family business. Having been in the family for 100 years, the Spook Light Hotel has its share of history and a number of resident ghostly spirits. To both give their father the information he needs to put the right person’s name in the will and weed out the good from the evil, the adult children are invited home for a dramatic family gathering.

Will the corpse be someone in the show or a “special guest” brought from the audience after Act 1? Are the partners of the Goodrests’ adult children Hiram and Lizzie really what they seem? What is the “dreaded disease” that killed off the ghostly spirits? Was the Spook Light Hotel always a hotel … or was it once a hospital with a tainted past?

In March, Community Circle Players (CCP) will be producing Joh Mann’s murder mystery Spook Light Legacy, which is loosely based the on the real Crescent Hotel in Eureka, Ark. Plan to be entertained by CCP’s performances of the script, which has been tweaked for SaddleBrooke audiences!

The backstory? The State of Oklahoma’s tourism office wanted Joh’s help enticing winter visitors to the lake lodges around the state, and she knew murder mysteries and lighthearted comedies would be a draw. After trying to track down good scripts, she concluded, “It’s faster and easier to write a bad play than to find one.” She creates a script a year. Spook Light Legacy was her fourth.

Playwright Mann specializes in “murder, mayhem, and mystery.” She describes her farces, many of which have music, as sometimes “over the top,” giving actors a chance to exaggerate for fun. Mann has written a total of 10 plays as fundraisers for charitable groups and, over the years, raised about $20,000 for her local community theatre. Typically, 100 to 200 people are in her Oklahoma audiences. On purpose, she keeps the costs for her sets minimal (so she can “raise money not spend it”) and makes them easy to transport from one location to another. When we talked by phone, she was in the process of moving a show that night.

Mann is a state-certified teacher of 11th grade language arts—English, drama, and debate—who volunteers to promote the arts. She is excited about CCP’s production and hopes to attend one of the SaddleBrooke performances March 25 through 31, 2023.