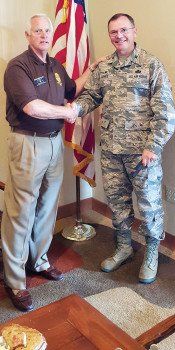 On January 28, the guest speaker at the SaddleBrooke Sunrise Rotary Club was Colonel Rodger Schuld. Colonel Schuld is the Commander of the 355th Mission Support Group at Davis Monthan Air Force Base. He has held this position since June of 2014.

A civil engineer by education, Colonel Schuld is also a graduate of the United State Air Force Academy in 1979. In his present position he oversees a group of six squadrons and 2,200 personnel. The annual operating budget is in excess of $22 million. Under his command, he manages housing, construction and environmental programs at Davis Monthan as well as directing supply chain and fuels support for 160 aircraft and a fleet of 650 vehicles. There are four strategic categories regarding the base. They are Operations, Maintenance, Medical and Mission Support.

In his presentation Colonel Schuld stressed the importance of the role Davis Monthan plays in protecting this country. He emphasized the value of the A-10 and indicated he sees the A-10 as an ongoing part of the Davis Monthan operations. He also indicated that the facilities of the base provide the needed infrastructure and that the base is not going away.

Other areas of importance are the Drone program and the “Boneyard” which is considered the third largest fleet of aircraft in the world and is used primarily for aircraft maintenance and parts. He also shared the role military personnel at Davis Monthan have played through numerous deployments to areas throughout the world in support of our nation’s military presence.