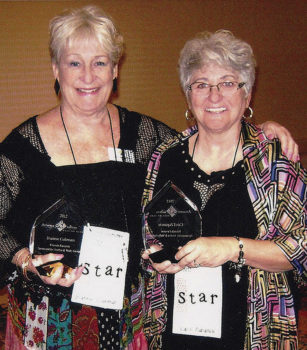 The Friday Quilters Club has been around for almost 25 years and, in that time, members have made a significant impact on not only SaddleBrooke community residents, but the entire Tucson community. Two very special people formed a friendship that has had lasting effects on the Tucson healthcare community. Carol Zupancic belonged to a quilting club in Joliet, Ill., and Jeannie Coleman had started a club in Sacramento before moving to Arizona. The two met when they joined the Tucson Quilters Guild. Jeannie also was volunteering at the Tucson Medical Center at the time and offered to display quilts at the hospital. During the first year, quilts came in from all over the country as SaddleBrooke snowbirds responded to their requests for quilts to Sew a Cure for Women’s Cancer, now known as Quilt for a Cause. Both Carol and Jeannie had experienced cancer themselves and put all they had into making the first show a success. The two got very creative to raise the initial funds needed to put the show on and to raise awareness in the community about the event. They did a “strips poker” event, a fashion show where they wore quilts as clothing, a Ladies Night Out, trunk shows, and so much more! Lou Holz was a celebrity sponsor and Susie Weaver donated the very first raffle quilt. Several SaddleBrooke units kicked in by holding fundraisers for them as well. The first show had 150 quilts. Each quilt arrived with a story about someone who was living through or who had died from a woman’s cancer. Fast forward to today, the Quilt for a Cause show now displays and sells over 1,000 quilts annually and has raised over $1 million for women’s cancer research and support for women living with cancer. Carol and Jeannie were awarded a Ben’s Bell (Tucson community service award) in 2006 and they were inducted into the Arizona Quilters Hall of Fame in 2012. Their combined efforts have truly left a legacy in our community. Sadly, Jeannie passed away in 2017, but Carol continues to be a very active member in the SaddleBrooke Friday Quilters Club and is the club’s sage when it comes to anything Quilt for a Cause!