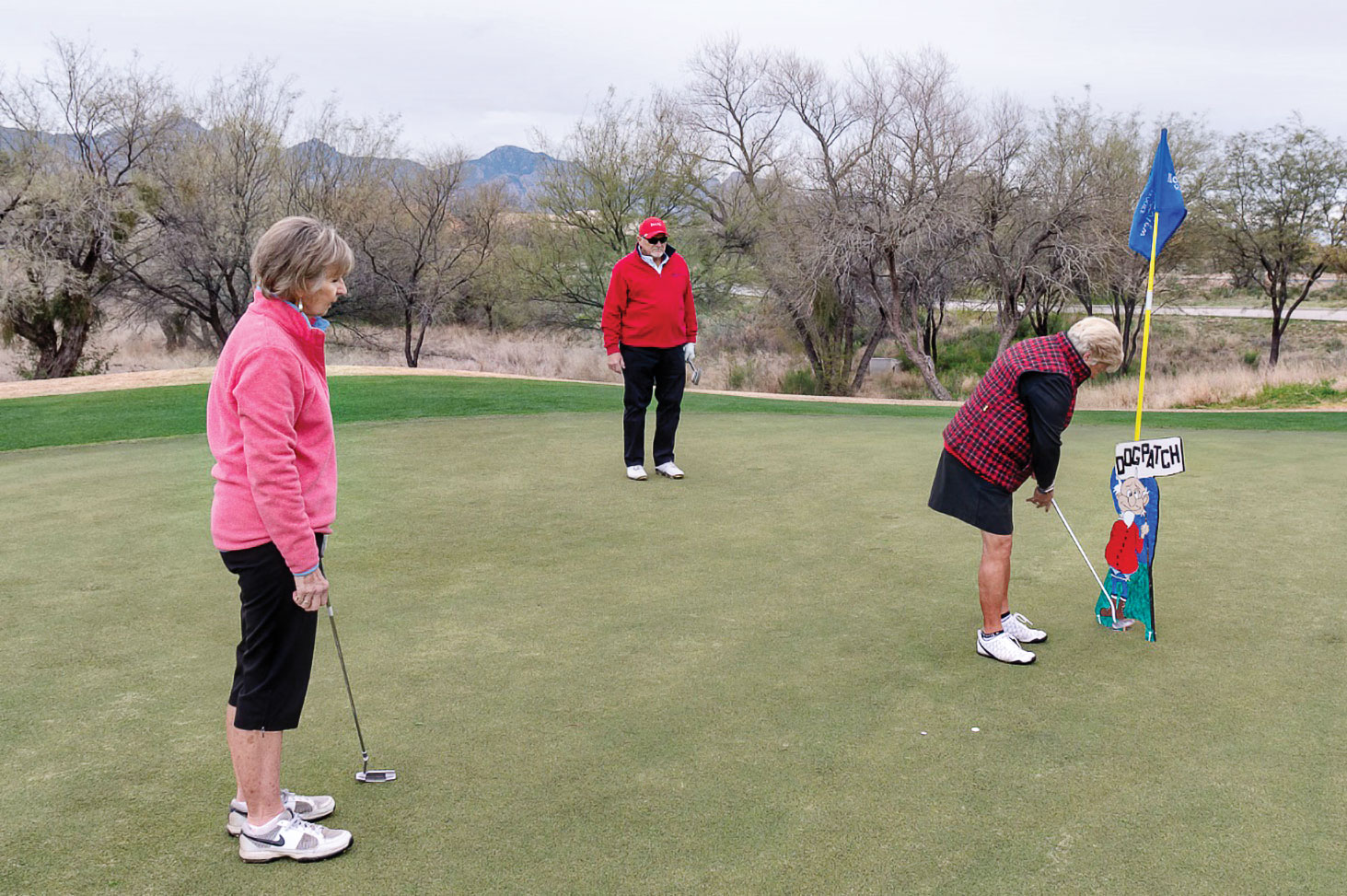 Bubbas and Sadies navigating the Dogpatch.

This year’s Bubba Hawkins (MPMGA version of the MPWGA’s Sadie Hawkins) golf event took place on Thursday, February 14 at the MountainView Golf Course. Signups started over a month prior so our golfers had plenty of time to seek out a willing Sadie golfer to join in this annual couple’s fun golf event. Events chairperson Don Erickson had asked Rennie Temple to run the tournament while he fished for piranha in the Amazon with several of his SaddleBrooke cohorts.

We quickly had 38 teams signed up and all was going as scheduled. Several single Bubbas were looking for a willing Sadie. And thanks to Loralee Horwedel from the MPWGA we were able to partner up ten guys and gals. Thanks, Loralee! And thank you, Sadies! Signups soared past the 40 that was budgeted and was finalized at 50 couples. We had at least ten new players (both Bubbas and Sadies). Great turnout! Rennie was stuck with the hard part of figuring out pairings and fashioning scorecards. An almost insurmountable challenge for a Purdue grad, but Rennie persevered and success was realized. His hard work was blessed by both the MPWGA and MPMGA.

Now for the weather forecast. Rain!?! No! The forecast of up to a 90% chance of showers on Bubba Hawkins Day had everyone concerned. Even if we did not get the golf in, we were committed to the luncheon featuring Chicken Cordon Bleu. When the day actually arrived, the weather was not too bad. The event was completed with minimal sprinkles. During the round, there were lots of frustrations and some celebrations with the hole cutouts. Originally, there was thought of having a putting contest on hole 1 but decided that the whole MountainView Golf Course is a putting contest in itself. Quick greens, lovely pin placements and the nefarious Poa Annua.

Luncheon and scoring took place in the West Ballroom. The tournament was extremely close with only one and a half points separating the first three teams. First place was captured by the team of Mark Gingerich, Lori Stegink, Joe Oczak and Loralee Horwedel. Twenty of 25 teams were in the money, so most everyone got some $$$ on the books. Thank you to everyone who participated with hopes that everyone had a good time. Thank you also to Matthew and Mike for scoring. Thanks to Bill Webster for arranging a wonderful menu and to all the prep and serving staff. And finally thank you to Loralee Horwedel and Janey Clausen and the whole MPWGA!

Hope to see you all in next year’s Sadie and for sure in the 2021 Bubba.