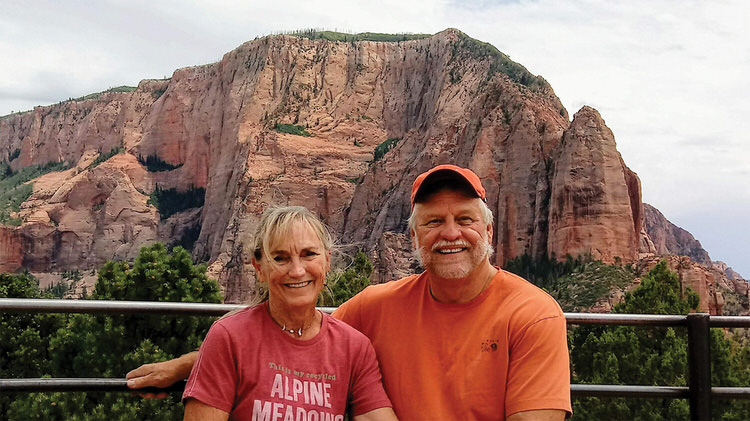 I was preparing dinner when my husband called from the driving range. “I just met a person you really need to meet. His life story is amazing,” my husband said. And that exchange led to a sit-down interview with Bruce Cornell, a remarkable and truly inspiring individual.

Bruce arrived for the interview in one of his many wheelchairs—he has eight of them; his easy smile and friendly demeanor belied the uphill challenges he had endured for years.

Bruce’s parents were both educators who inspired Bruce and his two brothers and a sister to, basically, be the best that they could be. Bruce was a standout football player, who also played basketball in high school, and a stellar student. Subsequently, he earned a B.A. and a master’s degree. (As a side note, his great-uncle is Carl Rogers, noted American psychologist who pioneered Client-Centered Therapy.) Bruce was encouraged to take a doctorate but, instead, opted for a career in the construction industry.

Bruce’s life-changing story began on March 18, 1985, at exactly 9:05 a.m. when a runaway truck at a construction site where he was working hit him, severing his spinal cord, and causing a collapsed lung, a broken shoulder, and seven cracked ribs. He knew immediately that it was serious. He was transported to Scripps La Jolla Hospital in San Diego and was taken to the trauma center. The trauma surgeon broke the news to Bruce: “It’s pretty conclusive you’ll never walk again. But I can save your life.”

After 10 months, in January of 1986, Bruce began a career in wheelchair sports: alpine downhill snow skiing, tennis, basketball, waterskiing, cross country skiing, wheelchair road racing, and hand-cycling. Then he was asked to be on the board of directors of the Scripps La Jolla Trauma Unit.

In 1992 he and his wife moved to Truckee, Calif., and they began working in the ski industry. Eventually, they both became certified as professional ski instructors (Bruce with adaptive equipment) through the organization Professional Ski Instructors of America. As well, they both volunteered as snow skiing instructors for the disabled.

He met Mountain Hardwear developer and owner Jack Gilbert who sponsored Bruce for his company in adaptive sports competitions. The sponsorship included product testing and speaking on behalf of the company. This developed into a lifelong friendship.

Eventually, Bruce became associated with many other companies in the outdoor industry. Along with his connections with Scripps Hospital and Mountain Hardwear, this led to his motivational speaking engagements at universities, high schools, and elementary schools, among others. He especially enjoys the youthful inquisitivity of elementary school age children who ask the best unfiltered questions.

Bruce golfs with a Solo Rider adaptive golf cart. He lives with his wife Billie, and they both enjoy swimming, bike/hand-cycling together, as well as all the other amenities the SaddleBrooke community has to offer.