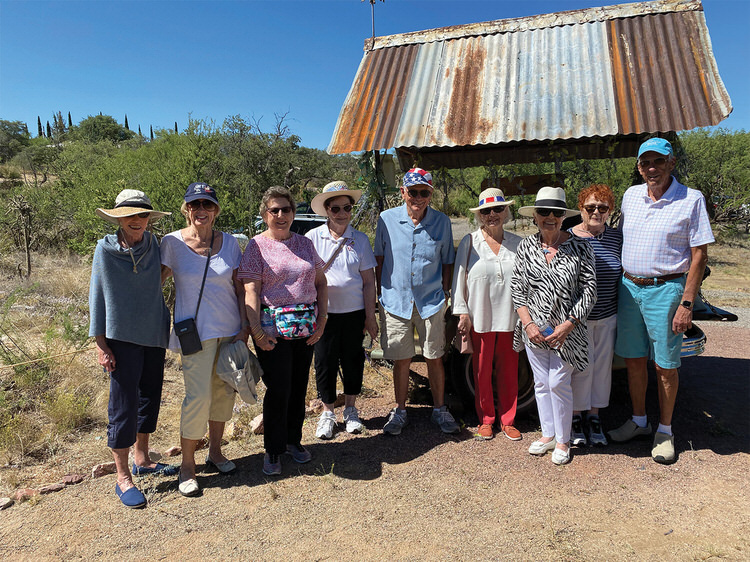 The British Club at the lavender farm

It was Thursday, June 2, the first day of Queen Elizabeth II’s Platinum Jubilee, an amazing 70 years on the throne! At 10 a.m. six members and three friends of the British Club carpooled, braving the temperature of over 90 degrees, and ventured out to the Life Under the Oaks Lavender Farm in Oracle, a 20-minute drive away.

Walking through the blooming lavender fields was a delight, with the fragrance of lavender in the air and cute artifacts all around. It was a treat to see the ducks napping and the donkeys who were curious and welcoming. It was very interesting to learn about the different types of lavender and shop at the lavender boutique. There were plenty of fun areas to sit and rest in the shade under the beautiful trees, perfect blue sky, and sunshine. Happy after our lavender fields experience, we said our fond farewells to Life Under the Oaks. On our way home, we made a stop at the Iron Antiques store, which is always interesting! We then drove back to SaddleBrooke where we had a splendid lunch at The Preserve. Everyone thanked Ethel Willmot for organizing this fun event.

The British Club has resumed their games afternoons every second and fourth Friday of the month. They will have a social event in the bar area at the SaddleBrooke clubhouse, which includes: canasta, Mexican Train, and maybe bridge from 1 p.m. until around 4 p.m. This is followed by a social hour and a bar meal.