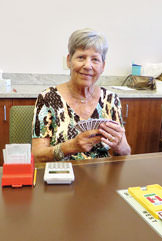 Sue Hagerty is a regular player at the MountainView Bridge Club. Photo by Sue Bush.

Sue Hagerty, a regular player at the MountainView Bridge Club, moved to SaddleBrooke from northern California with her husband, Rich, eleven years ago. They feel that it was the best decision they ever made. Before life in SaddleBrooke, Sue worked in retail and had three children. She also was involved in fundraising for the Cancer Society and the Ronald McDonald House. She is most proud of being part of starting the first bike-a-thon for cancer that has continued successfully through the years.

Sue started playing bridge in her twenties, but it wasn’t until her sixties that she and a friend decided to try duplicate bridge. They had a goal to obtain 100 master points each year, and they did it! They were hooked on the game forever.

In SaddleBrooke, Sue has also been involved with a team of volunteers who sponsor The Longest Day for Alzheimer’s. She enjoys hiking, tennis, mah jong and a little pickleball, as well as volunteering at the Golden Goose one day a week.

Many of us also know Sue as the person who notices you when you’ve had a good bridge game and makes a point to come over and congratulate your efforts. And her kind words are most appreciated!

According to bridge expert Larry Cohen, “Logic and concentration are much more important than memory” in being a competent bridge player. He advocates knowing basic bridge conventions well but not wasting time and energy on fancy agreements. He adds, “Your best bet is to adopt CRAFT as your favorite convention. What does it stand for? Well, the first three letters stand for Can’t Remember A…”

The MountainView game is held at the Catalina Room beside the Mesquite Grill on Tuesday and Friday at 1:00 p.m. Check the website for possible changes. If you need a partner, contact Jo Ann Aiken at 520-256-2702 or [email protected]