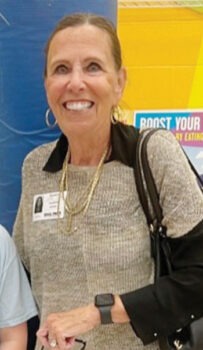 SaddleBrooke Hiking Club members anxiously await the arrival of the club’s newsletter every two months! The issues contain articles, photos, and the upcoming hike schedule. But many members don’t know that the diligent work of Maureen Spence is behind these publications, because her name does not appear anywhere in print.

A Midwestern girl, Maureen grew up just south of St. Louis in De Soto, Mo. She became known as “Mo” during the birth of her first child. Her doctor thought the name “Maureen” was too long to say, so he coined the nickname Mo during her delivery, when time is most definitely of the essence!

Maureen had not previously been a hiker but decided to attend a meeting after reading about the club in one of the neighborhood newsletters. There she learned about the basics of hiking, including proper clothing and equipment, and off she went. Influenced by Larry Linderman, Mo, along with 12 others, hiked the entire length of the Arizona Trail between 2010 and 2012. Unfortunately, injuries have recently kept her off the trails, but she does continue to walk regularly.

When the club needed help with the newsletter, Maureen stepped up and has served for the past nine years. The process involves many hours of requesting, proofreading, and editing articles, as well as formatting the entire document prior to publication. She recalls this being a much more difficult process when the newsletter was a printed document. After going digital a few years ago, the limitations of article space and photographs happily disappeared!

But Maureen’s passion is travel! Over the past 50 years, she has traveled internationally once or twice each year, visiting more than 100 countries on six continents, and she has had more than her share of adventures!

Volunteering with her church group, Maureen spent two weeks in Haiti after the island was devastated by Hurricane Sandy in 2012. During that time, she worked with a team of American, Haitian, and French surgeons and anesthesiologists helping to facilitate communication among the medical teams.

In 2014 Maureen traveled with a group of teachers from Tucson to Wuhan, China (yes, that Wuhan!) for six weeks to teach conversational English to university students, including a 12-year-old genius. While there, she was able to do a bit of sightseeing and even visited the open-air market (yes, that market).

Maureen considers herself quite fortunate to have been able to travel extensively with her father Joe. Together, they visited all the major cities in Europe, as well as Hong Kong, Beijing, Singapore, Tokyo, and Bangkok. For her next trip, she is considering returning to Turkey to continue her adventures abroad.