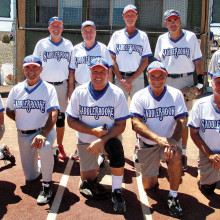 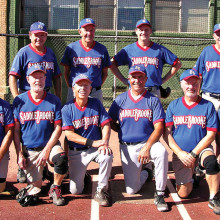 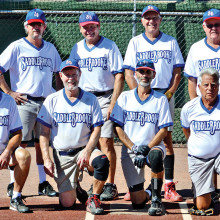 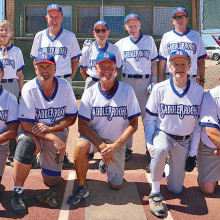 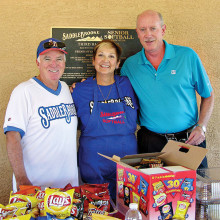 They were well fed, too!

80 players, dozens of volunteers, sponsor Jeff Johnson of Merrill Lynch and Doug Wagers of Window Wizard with his amazing Louisiana Cooker assured a perfect experience for all. Dominick’s Real Italian Restaurant contributed cannolis for the event.

In the first game Community League visiting team SaddleBrooke R Us, managed by John Perfetti, dominated Harold Weinenger’s Bank of the West after mid-game back to back three run innings. Perfetti’s three for four with single, double and triple and George Corrick’s and Tom Klein’s four for four helped deliver a 10 to 4 victory.

Each of the next three was won by one run.

Allan Kravitz’s Vantage West Credit Union took Ken Heaton’s Coyote Golf Cars 11 to 10 in the Coyote League on the strength of a five run fourth inning despite Darrell Sabers going three for four with two triples and strong hitting from Mike Hamm (3/4) and Jim Becker (4/4) for the losers. Vantage saw star performances at the plate from Dominic Borland with a home run and double, Rob Lowry, 3/3, and 2/3 for Alan Stein, George Corrick and Dale Norgard.

New game, same score: 11 to 10 in game three. Recreation League’s game saw Charles Hendryx as skipper of the winning Patrick Shaffer Dentistry over Ron Romac’s Home Team Pest Defense, coming from behind with a five run sixth only to have to come from behind again, this time with a walk-off walk in the seventh! Perfect at the plate for the losers were Romac, 3/3 and a walk and Jim Becker 4/4, while Tom Klein went 4/4 with a triple and Dale Norgard was 3/4. Defensively Jack Graef made a great catch of a foul just off third base and second baseman Steve Wehmann made a stunning backhand grab and a ground ball foot stopper for an out as well.

With three games and lunch completed the Competitive League took the field; home team Danny Nolan Handyman, Bob Chiarello managing, against Rich Adam’s Shifren Physical Therapy. What a finish! In the seventh, losing by one, but with runners on second and third and one out, Adams intentionally walked hot hitting (4/4) Tim Ward to load the bases and face manager Chiarello. The bet was lost when Chiarello placed a long hit that scored the two runs needed for a walk-off 19 to 18 victory. Charlie LaNeve also went 4/4 with a double and triple and Joe Passoni hit a home run for Nolan. Shiffren’s batting stars were manager Adams 4/4 with home run, triple and two singles, Brian Stevens 4/5 with two doubles, Doug Sweetland 4/4, Jin Weiss 4/5 and Mike Hamm 3/4.

The next SSSA tournament is Thanksgiving time. Four games, free lunch and fun at SaddleBrooke’s Stadium. Plan to be there!