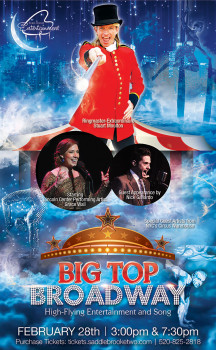 What happens when you combine the music of Broadway with the finesse of circus artists? SaddleBrooke audiences will be able to answer that question for themselves when Big Top Broadway comes to the DesertView Performing Arts Center on Saturday, February 27.

In addition to the talented vocalists who have previously graced the SaddleBrooke stage, including Stuart Moulton, Grace Wall and Nicholas Gallardo, Big Top Broadway features internationally-renowned circus artists Jonathan Nosan, Kelsey Straunch, Julie Krygsman and local troupe Cirque Roots led by Stephanie Cortez. The show highlights well known Broadway show tunes as well as some little known gems and augments them with interpretations by aerialists, jugglers and contortionists. Performers will literally be swinging from the rafters. Khris Dodge Entertainment is producing the show and it will include a live band to accompany the performers.

Ringmaster Stuart Moulton has spent more than 20 years as a dancer, actor and singer and added circus artist to his repertoire about a decade ago. He first took to the air at Trapeze Austin in Texas and then went to work at New York’s Circus Warehouse about four years ago. He also teaches at the Omega Institute’s summer program where he specializes in trapezing.

“Circus arts have evolved and are used in every aspect of entertainment these days,” says Moulton. “In the New York theatre community circus artists are being used and incorporated into shows more and more. Because of the popularity of Cirque du Soleil, shows are being reinvented and utilizing aerialists, jugglers and other specialty acts. I’m excited to collaborate with Khris and bring this original idea to fruition. I’ve worked with Grace and Nick before and to be able to add the talents of the circus artists is going to be phenomenal.”

What can audiences expect to see and hear during Big Top Broadway? A lot. Lincoln Center performing artist Grace Wall will offer her renditions of hits such as Don’t Cry Out Loud and Defying Gravity while Julie Krygsman performs aerial work on silks or the lyra (steel hoop) above her. At another point, Stuart will offer a bit of his own Razzle Dazzle while troupe members bring a three-ring circus to the stage. Add in a bit of contortionist Jonathan Nosan’s amazing feats and audiences will leave with a feeling that they’ve witnessed something special.