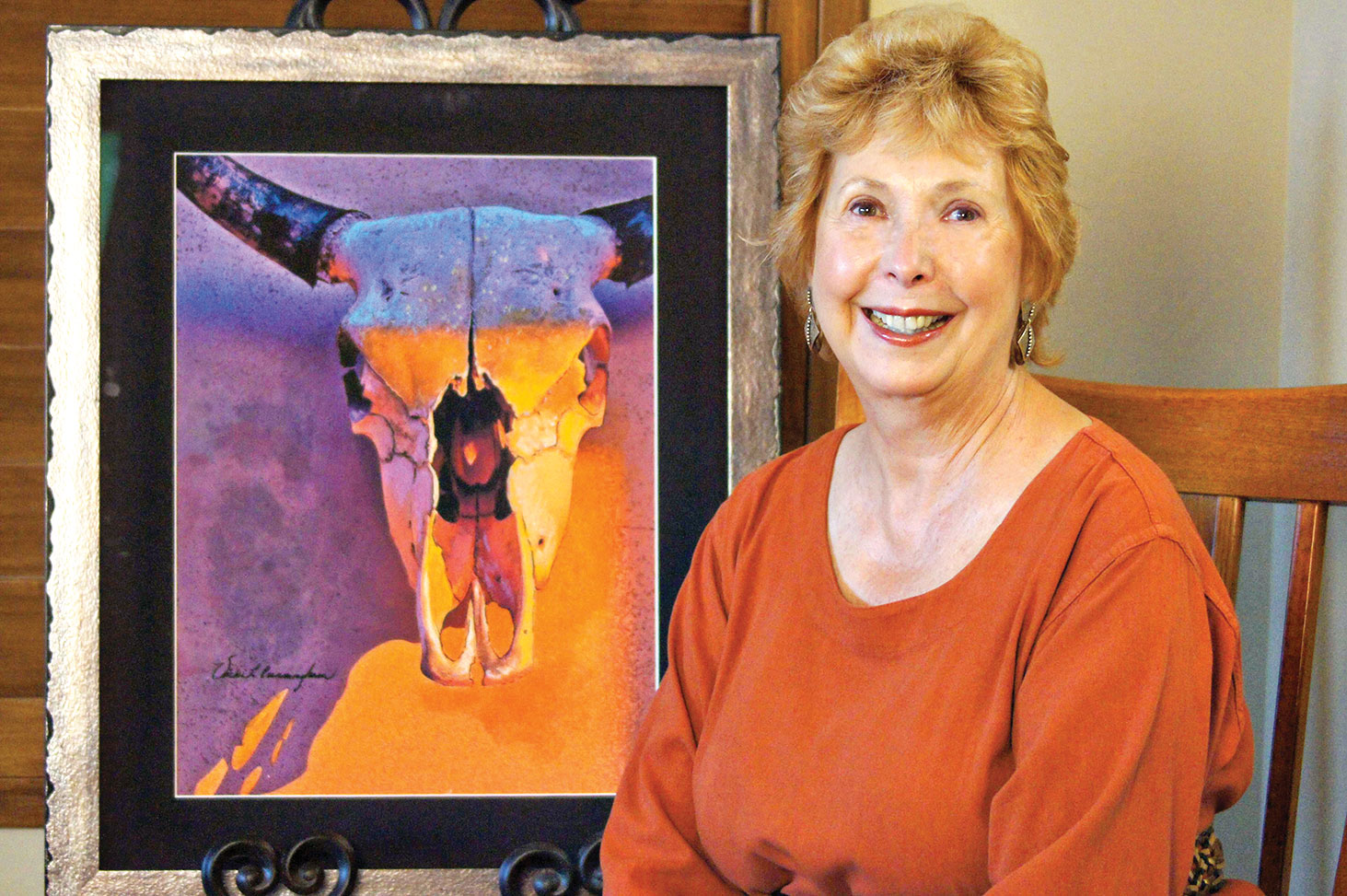 Vicki Cunningham faces life’s challenges with undaunted spiritual strength and optimism. So, too, does her masterfully created artwork bristle with introspective stories and undeniable sophistication.

The only child to Mardelle and Art Hoppe, Vicki was born in Tacoma, Washington, and raised in nearby Lakewood. Growing up, Vicki developed a life-long passion for horses, art and music. In fact, at the age of twelve, she persistently asked for, and eventually received, her own horse. Atop beloved palomino Sabrina, Vicki performed with countless equine drill teams such as Colts ‘n’ Fillies.

Her love for art and music began then, too. Proudly Vicki attributes some of her artistic genes to grandmother Louise Hoppe and grandfather Earl Pilgram, both renowned artists. Vicki would continue to develop her own artistic skills over the next forty years using life experiences, good and bad, as inspirations for her themes.

Meanwhile after high school, eighteen-year-old Vicki pursued a singing career in California and became an equity performer in a Long Beach choral group for international Christian media and publishing company, Zondervan. This led to the group’s recording of an album and music book, performances for churches and a singing role in the Long Beach Broadway production of Kismet, alongside Howard Keel.

Vicki also took a job in the McDonnell Douglas mailroom, delivering communications via roller skates. Her desire to improve herself led to programming and finance classes – ultimately becoming a Fiscal Analyst. It was then Vicki’s mother, father and stepfather became seriously ill. She returned to Washington and became caregiver to her parents, bride to a new husband, mother to son Craig and ranch hand on her new family’s appaloosa horse farm. She also took a position as the Harrison Memorial Hospital Budget Accountant.

In 2001 Vicki found herself once again on her own. Inspired by artists Lee Bogle, Jerry Becker, Carla O’Conner, Michele Cooper and others, it was time to re-immerse herself into the art world she sorely missed. Traveling with a friend, she created breathtaking paintings throughout Italy, even selling two of them to the owner of Borgo II Poggiaccio in Sovicille.

Since 2007 Vicki and husband Terry have resided in SaddleBrooke. Her watercolors, oil paintings, mixed media and photos display a passion and charm truly exemplary of this talented artist. Her creations have received honors, appeared in galleries and juried shows and sold to countless patrons. Additionally, Vicki is an active member of the Peninsula Art League, Northwest Watercolor Society and SaddleBrooke Fine Arts Guild. Currently Vicki acts as the Guild’s Program Chair and Art Lecture Series Coordinator.

Vicki considers her artistic talents a gift from God. For her, the most fulfilling aspect about her creations is in the doing. She feels her works are reflections of her soul and resiliency, places she has visited, life experiences and emotions. When others find meaning in her art it fills her with heartwarming joy. Gazing upon her exquisite works we can gratefully say the same to her.