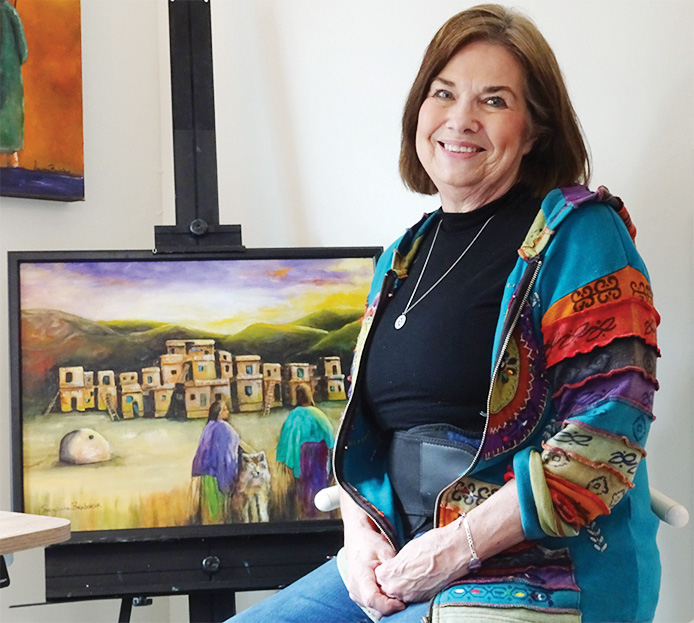 Suzanne Brubaker pauses in her studio with an in-progress work. (Photo by LaVerne Kyriss)

Suzanne Brubaker says she is challenged when coming up with ideas for new paintings. “Only occasionally does an idea just pop into my head. Often, I have to see something in a book or online or be out and around and see something to get an idea for a painting.”

So, when the SaddleBrooke Fine Arts Guild announced its One Image, No Limits contest last year, she immediately decided to enter. “My husband John and I had been toying around with some ideas that I should paint something for the exterior of our home. We love the Southwest and Mexican styles found in our desert. I thought I could use the contest idea to spark something that we’d love at our home,” she explained.

For her effort, Brubaker won an award of excellence in the intermediate and advanced category. Contest judge Laurie Brussel commented that her use of materials was very unique. “It’s like a café and is very welcoming with a very warm feeling. A lot of thought went into it,” she said.

“Knowing this painting was destined for outdoor use, I rummaged through some leftover tiles from a bathroom remodeling project we’d completed and decided these would be the painting’s surface. Then I had to come up with a surface on which to mount them,” she added. With that problem solved, and the tiles mounted and grouted to a wooden board, she only then began to plan her painting.

“My layout was quite tall and narrow—too tall for the door in the photo—so I added several elements and it became reminiscent of a restaurant in the barrio, LaCocina. I think it’s a playful piece that welcomes visitors into a friendly setting,” Brubaker said.

The actual painting only took about two weeks, she said. “I first applied gesso on the whole tile field. Next, I did a base painting in acrylic to get the design set. Finally, I added water-based oils on top and used oil pens for the tiny details.”

“I learned in school you could never paint with acrylics on top of oils. Until I moved to SaddleBrooke and learned from others in the guild, I never ever imagined you could paint oils over acrylic. By using acrylics in the base layer, you can complete the design in a day because it dries fast,” Brubaker said. “Then you can add the depth, highlights, and shadows and all the other elements. But acrylic paint sometimes dries too fast in the desert. Without the support and encouragement from other artists in the Guild I would have never learned about water-based oils and tried them out. This gives me the best of both media,” she explained.

“Taking classes, interacting with other artists and figuring out what works for you, is part of the Guild’s draw for me,” Brubaker said. “When someone asks you a question in open studio about how or why you’re doing something, it’s not to judge you, it’s because they genuinely want to know. They’ve helped me branch out in trying new things and become a big part of my community.”

Brubaker notes that she’s pretty shy and often seen as introverted. “Through the Guild I’ve met way more people than through the neighborhood. I’ve even been serving on the board as member at large and been stretching to reach out and call fellow members.”

Visit saddlebrookefinearts.org for more about the guild.