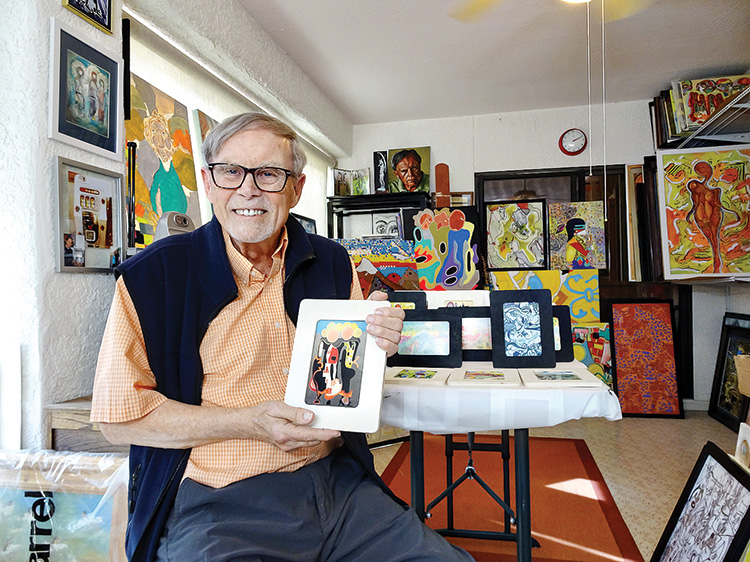 Paul Kopp displays a miniature photograph from one of his original pieces in his painting-filled studio. (Photo by LaVerne Kyriss)

When Paul Kopp retired from running a flooring business in Topeka, he went back to school.

“I wanted to change my focus from running a business and spent three years taking classes at our local college. Along the way, I discovered art and I was hooked. I concentrated and learned the basics. I invested all my effort and even built a basement studio,” he explained, noting that was about 20 years ago, adding that one of the reasons they settled on their SaddleBrooke home was because the enclosed Arizona room would make a perfect studio.

“I learned about techniques and mediums in school but never wanted to copy anyone else’s work or ideas. I like new ideas and am interested in exploring them. I’m fascinated by shapes and structures,” he noted. “You have to learn the basics, but then you need to go in your own direction.

“I wake up in the morning, get an idea, and start to play with a shape,” Kopp explained. “Let’s say I start with a circle. I add something to that and the design evolves as I go along. I’m always interested in what happens when I try something new.”

Kopp says when he’s creating something new, he falls in love with it. “I have a relationship with what I’m creating. After the honeymoon, I finally give up my infatuation and go on to a new adventure with the next creation. Every painting I do has a story to it. It started out with an idea that grew.”

Kopp said he works in his studio almost every day. “I need to work fast to get my ideas down. Often, I go back and explore different variations, trying out how they work or don’t work. When I was in school, we had a very useful exercise,” he explained. “The teacher gave us three or five minutes to get something down on paper or a canvas. That taught me to get an idea out there and not be afraid to put paint on a canvas or pencil to paper.”

Kopp noted that even when he’s travelling or on a vacation, he still finds a way to create art. “I don’t need a sketchbook or paints. I can always find some piece of paper. I just grab it and get my idea down. Then I can use that idea in something later.”

He reflected that he’s always exploring new ideas. “When I get bored with a particular approach I’ve been working on, I try something new. That’s why it’s very difficult to categorize my art as any particular style or approach. It’s just art, that simple. I keep changing it,” he laughed. “I’ve tried representational art, but am more attracted to a fanciful, playful style that often leans toward abstract.

“Lately, I’ve printed out small photos of a number of my original pieces,” he said. “People are running out of wall space for new paintings. This way, they can have something interesting that takes only a little tabletop or wall space.”

Even though Kopp lost vision in one eye as a result of a stroke in 2018, he keeps painting. “I’d be lost without painting and without the company of other artists,” he said. “I learn so much about life from art. I paint for my joy. As long as I’m painting, I’ll be fine,” he smiled. “We have sunshine and fresh air. What more do we need?”