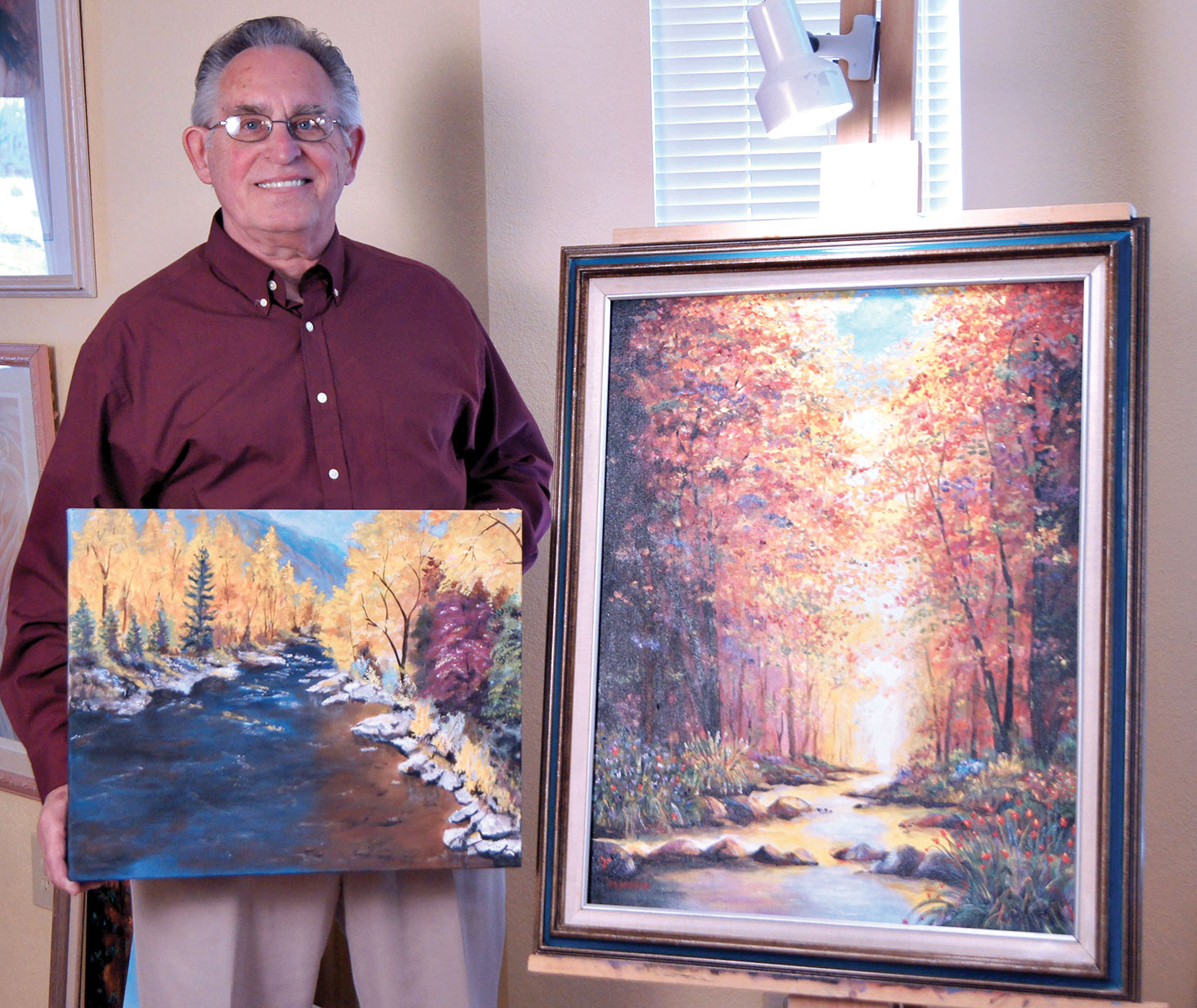 Fred Flanagan with Sunlight through the Trees and Autumn Leaves; photo by J. Cohen.

Self-defined as an eclectic artist, Fred Flanagan confesses he sometimes lies awake at night thinking about an image he wants to create or a technique or medium he wants to learn.

Born in Blandburg, Pennsylvania, Fred’s father, also Fred, an Army career serviceman, mother Margaret and younger brother Francis, moved constantly. Before beginning high school Fred had lived in several places throughout the United States and Europe. Always intrigued by his new surroundings, Fred loved to explore and create topography maps. Little did he know his mapping skills would later play a major role in his life.

To begin, at Penn State University Fred earned a degree in civil and structural engineering. Shortly after, in 1965, while working for American Bridge in Ambridge, Pennsylvania, he was drafted into the Army. Fortunately, his premier skills in cartography along with a little luck of the Irish would ultimately keep him from being deployed to Viet Nam.

After Basic Training at Fort Benning, Georgia, Fred was transferred to Fort Stewart. Apparently Fort Stewart’s enormous self-supporting base that trained Army personnel in armor and artillery had no map of its extensive network of roadways and live fire ranges. Army brass, concerned for the safety of private contractors who worked there, tasked Fred with creating detailed base maps. It was there he would remain for the majority of his tour. Upon completion of his mapping duties, he was sent to Germany and then discharged.

Back in the states Fred resumed his engineering career and eventually took a position with MDCSystems® in Cherry Hill, New Jersey. In a nearby town Fred met his beloved wife of over 44 years, best friend and most trusted art critic, Patricia. Together they raised their daughter Dawn Marie in Cinnaminson, New Jersey. Life was hectic as Fred, a Project Manager, often traveled extensively for work. Over time Fred and Pat became empty nesters and in 2006 settled in SaddleBrooke.

Although he always had a strong interest in art, Fred never had the opportunity or time to explore its various mediums. Through SaddleBrooke Fine Arts Guild (SBFAG) classes, Fred took oil classes from Wanda Tucker, acrylic classes from Laurie Brussel and watercolor classes from Cheri Gossett. He found inspiration and knowledge through well-known artists as Johannes Vloothuis, Charles Palps and Native American artist BearCloud.

His journey has produced stunning human, landscape, nature and animal creations of art. Fred says he finds joy in creative processes, stimulation in medium experimentations and delight in acrylic’s speed, oils’ brightness, watercolors’ softness and multi media’s textures. Finally taking the next step, Fred exhibited at a SBFAG art show’s Student Booth. Since then Fred has been an active Guild member and exhibitor, thrilling admirers and customers alike. His paintings now grace the homes of art lovers throughout the country.

A multi-facetted artist of enormous talent, Fred Flanagan has barely touched the surface of what he wants to learn, create, achieve and share with all of us.