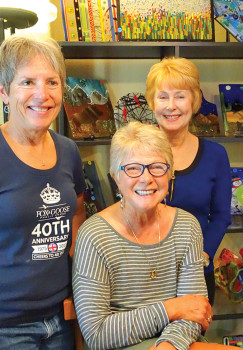 Terese Butler, Pam Gappa and Candy Armstrong with a few of their fused glass creations; photo by LaVerne Kyriss

They call us the Glass Ladies, explained Candy Armstrong in introducing her artistic collaborators and business partners, Terese Butler and Pam Gappa. Armstrong and Butler met in Sacramento, California, where they both lived. They became friends and eventually took a fused glass class. Both were so intrigued by the results, in 2006 they apprenticed with a glass artist to learn the skills.

Soon they formed a small business to sell both their artistic and functional creations. Dos Sirenas Glass Studio soon moved south. Armstrong and her husband settled in SaddleBrooke in 2007. Meanwhile, the Butlers were planning a relocation to Prescott. But the home contract fell through and Armstrong suggested the Butlers check out SaddleBrooke. Two weeks later, the Butlers bought a home in the same unit. So the glass studio moved to the Butlers’ garage.

Meanwhile, the Gappa’s relocated from Houston to SaddleBrooke. It was at a unit party that we met, recalled Gappa. “My neighbor said she wanted me to meet some of the younger neighbors. We sat with Candy and Terese and we really hit it off. I was so intrigued by their fused glass hobby/business that I begged them to let me hang around.”

Soon the California duo asked Gappa to join the business as a partner and eventually the studio moved to the Gappas’ home where it has expanded to the garage, an indoor studio with three work stations and part of the patio. With two kilns, grinders and saws, plus all the materials and glass supplies that we use to build a fused glass project, we needed more room.

“We all come to this work with different skills, different viewpoints and different things we like to do,” explained Butler. “I’m known as the fitting master. I like to work with the various pieces and shape and grind them to fit snuggly together. Candy is the expert when it comes to making small, detailed pieces. She also forms animals and Southwest scenes. Pam is our free form artist who experiments with vivid colors.”

“I let the art take me where it goes,” Gappa said. “I don’t plan out my work with drawings the way Terese and Candy do and sometimes a piece has to sit on this shelf for quite a while before it tells me what’s in it, but eventually, the art is revealed. Then I get to work on creating it.”

While each has her specialty and approach to fused glass pieces, they all agree that the best part is collaborating on pieces they originate and on commissions that require each of their skills. Armstrong is working on a commission featuring Kachina figures and Butler is working on a glass piece featuring a musical score and a piano keyboard that’s to be a gift. “One rule we have is that we don’t offer an opinion on someone else’s work unless we are asked,” Gappa noted. “But it’s great to get feedback when you’re stuck and don’t know what to do.”

“Also, we push ourselves to continually be creative and invent new ideas each year,” Armstrong said. “We enjoy creating something that someone falls in love with and they adopt the piece and take it home.”