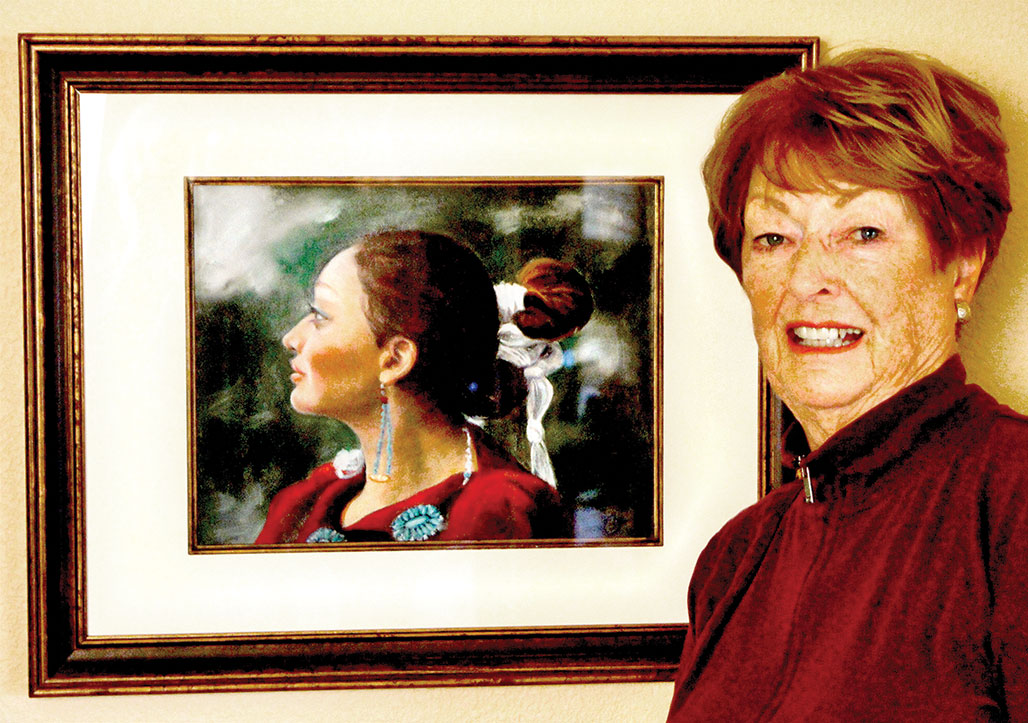 Against a large bedroom window amid cherished treasures sits a small, dark wooden table. Its surface is adorned with a blue towel colorfully smudged with numerous pastels atop, an artist spotlight clamped to its side and a desktop easel that supports both a photo and exquisite unfinished image of a Cape Cod seascape. One can almost imagine classical music playing softly in the background and little dachshund, Schatzi, snoozing nearby as Barbara Cox masterfully applies her art.

Born Barbara Cullen, September 1, 1936, in Buffalo, New York, Barb’s father John, mother Emma and brother Dick soon moved to Syracuse. Among the pristine lakes of the Adirondack Mountains and the Finger Lakes, Barb’s father, an avid outdoorsman, led frequent family adventures. They would canoe and swim in the summer and skate in the winter. It was a time when growing up in a small neighborhood allowed her freedom to cultivate her love of nature and animals. So, too, did her high school art classes provide the means to express these inspirations.

After leaving Syracuse’s Le Moyne College, Barb worked as a bookkeeper for Niagara Mohawk Power Corporation. While there, one cute trainee in the mailroom caught her eye with his particularly wicked sense of humor. His name was Grover.

Once married, Grover’s job required the couple and their five daughters to relocate every few years. Work often took Grover out of town, leaving Barb to raise their five girls. Even so, opportunities arose for artistic growth. While living in Wheaton, Illinois, Barb took oil classes and visited nearby Chicago’s Art Institute.

Through SaddleBrooke Fine Arts Guild (SBFAG) classes, Barb was introduced to pastels. But it was not love at first chalk. She tried again through a Guild class taught by Brian Freeman. She was hooked. Through Brian’s instructions, Barb found the media, direction and education she sought. She fell in love with pastel’s forgiving nature and the way the colors work and blend. Whether creating still life, portrait, landscape, or nature, Barb finds she can lose herself in this remarkable medium. “It’s the best way I know to express nature’s beauty. And when I did, I was sucked in.”

Over the years Barb has become an active SBFAG member. She has been involved with numerous SBFAG art shows and has chaired Guild committees.

Barb modestly calls herself a student of pastel. She often gives her artwork to her family. She is excited to start her next Guild class, taught by David Schwindt, which focuses on landscapes and allows for all media. Barb admits she sometimes has to push herself to work, but when the mood strikes her she finds there’s no place she’d rather be than an art classroom or at her small wooden table in her bedroom with Schatzi by her side.