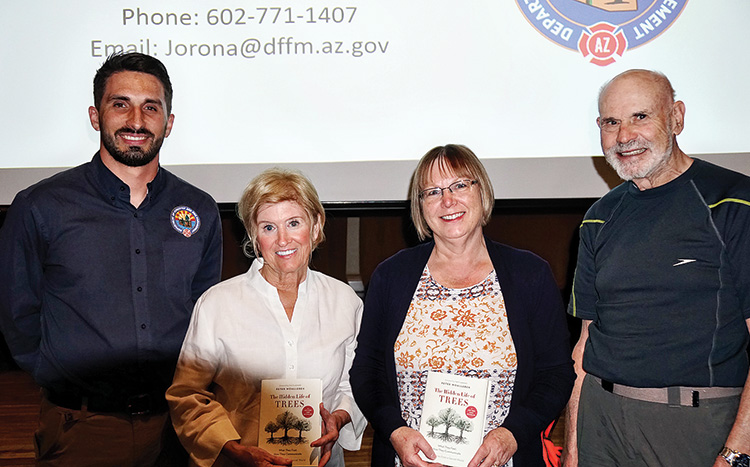 Looking down the street at the scrawny mesquite and palo verde trees, it’s hard to imagine that magnificent trees exist in our state. SaddleBrooke Nature Club’s speaker has documented some 200 grand trees in Arizona. And he’s asking us to find more!

John Orona, is an urban forest specialist with the Arizona Department of Forestry and Fire Management. Part of his job is documenting trees for the Arizona Magnificent Trees program. There is also a national registry for magnificent trees. John documents Arizona”s spectacular trees and checks up on them every ten years as part of the registry’s requirements.

What are the requirements? First the tree must be measured.

Width is measured four and a half feet up from the ground. Sounds easy enough? In some cases, it must be determined if it’s one tree or two that have grown together. Height is measured using triangles and trigonometry. Sometimes the trunk is curved. Sometimes the tree is growing off the side of a mountain cliff! Finally, the crown of the tree is measured. This can require some advanced trigonometry. Soon, drones will be gathering the data.

The trees fall into one of three categories:

Champion Trees: the biggest trees identified in a species

Witness Trees: proven to have existed when Arizona became a state in 1912

John’s photos of some of Arizona’s magnificent trees were spectacular. They included an Athel tamarisk homestead tree in Chandler; a ponderosa pine in Oak Creek Canyon; a cottonwood in Tremont; a 117’ long beak eucalyptus (Red River gum) in Boyce Thompson nicknamed “Mr. Big;” a 114’ gambel oak in the Coconino National Forest; and the tallest tree found in Arizona up to now, a 159’ blue spruce found in Coconino County.

In Flagstaff, there is a Heritage tree planted during the bicentennial celebration. The seed from this Douglas fir was on the spaceship for the Apollo 14 mission. In Mayor, you can see a tree nicknamed “Mr. Who” for the great horned owls that nest in it. Locally, you can visit the soaptree yucca in Oro Valley, an Arizona walnut in Marana, and a cypress in Bear Canyon.

Even better, John and the Magnificent Trees program are asking us to find more trees! If you do find a tree that might qualify, send John the approximate measurements and location. This can be done at dffm.az.gov or by emailing John at [email protected] John can also be reached at 602-771-1407.

SaddleBrooke Nature Club meets in the ballroom at SaddleBrooke TWO the second Monday of the month. Upcoming programs include falconry and our annual special guest speaker, Doris Evans.