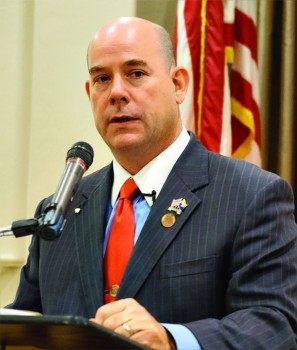 Arizona State Speaker of the House of Representatives David Gowan

The SaddleBrooke Republican Club was pleased to welcome Arizona State Speaker of the House David Gowan at the club’s monthly meeting. Speaker Gowan has served in the Arizona State legislature since 2009. Not surprisingly he spoke before an enthusiastic audience of well over 150 club members and guests.

The main topics of the Speaker’s remarks were how the legislature had worked to reduce and shrink the deficit as well as how they had worked to shrink and remove more than $148 million of deficit by cutting waste. They had also added $104 million in support of the K-12 education programs. Additionally, they managed to cut their normal 100-day legislative session down to 81 days. Part of their effort was in leasing unused school facilities so that empty buildings were generating income rather than being a burdensome system expense. He talked about the new leadership within the Department of Child Safety and how the house had removed problem issues. They had returned responsibility back to the department with the now new agency head.

He addressed how the legislature had worked to bring about new, less costly and more modern blood testing facilities so that users did not need physicians or hospitals to gain this “walk-in” patient information. Currently there are 17 of these breakthrough facilities in Arizona. Support from the legislature made this happen. Speaker Gowan then spoke to how the legislature worked to support legislation on self-funding state healthcare insurance rather than supporting the restrictive and costly Obama Affordable Care Act. He also talked on how this legislature is working to transform more federal lands back to the State of Arizona, currently 42.3% of the land in our state is federally managed. That is 30,741,287 acres which produce no revenue to the people of the State of Arizona—STUNNING! He then spoke to our Second Amendment Rights and how Arizona is number one in the nation in terms of gun ownership support.

The Speaker then spoke to the Liberty Caucus and how those house members were working to develop coalitions with the tribes and tribal lands on water and management issues throughout the state so that benefits, resources and jobs properly accrued to them. He also mentioned the Park Link/Union Pacific opportunity in western Pinal County on the Interstate 10 corridor. He addressed how progress was being made now that staff changes had occurred within the State Lands bureaucracy. Linda Atkins was now in the leadership role and she was pushing for resolution so that development will happen. Speaker Gowan then pointed out that Apple was part way through building a new state of the art data center facility in Mesa. This $2 billion Data Command Center will play host to all the company’s data operations across the globe. It will be 100 percent powered by solar as Arizona has some of the best solar potential in the world. The construction will employ over 600 and the continued permanent staffing will be over 150 Apple employees. The Speaker then took questions from the floor.

Prior to Gowan’s program, the club took a vote by all the members present to accept a Board approved change to Article II of the Club’s Charter and Bylaws. This change was approved unanimously by our membership and will be presented online shortly on our website at sbrc1.org.