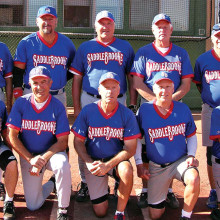 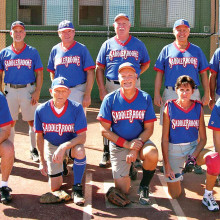 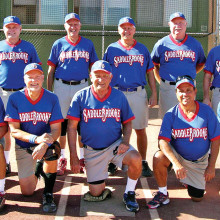 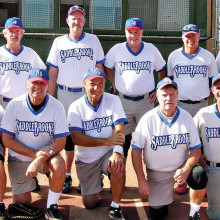 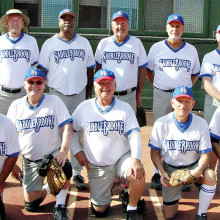 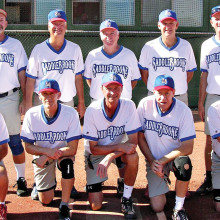 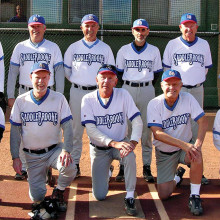 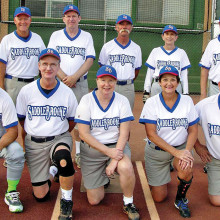 The men and women of softball are now playing the Winter Season. It’s great to have our snowbirds return helping to fill out a robust schedule of softball games each week. Let’s take a moment to recap the Fall Season and to honor our champions.

The HomeTeam Pest Defense Monday Community League saw a commanding 10 win season from BRAKEmax; Ron Quarantino was the skipper. They had only three losses. In second place, we had Jim Takacs managing the Window Wizard players. They ended up with eight wins and six losses, but did score an impressive 198 runs in the season. (Fun fact: this was more than the first place team which had 179.) And in third place, the Humana team, skipper Bill Wescoe, had only two wins with 11 losses.

On Tuesday, Vantage West Credit Union sponsored our Competitive League. We had a tie for first place and it was almost a three way tie. Both with seven wins, six losses, Johnston’s Pest Solutions, led by Bill Spevak, and Danny Nolan, Handy Man, Manager Tim Ward, scored an impressive 220 plus runs in the fall. Not so far behind with six wins and eight losses, DS Builders and Remodeling, with Harold Weinenger doing the line-up, also scored over 220 runs for the season.

The Thursday Coyote League, sponsored by HomeTeam Pest Defense, had Caliber Collision in first place. Ken Meinhart led this team to seven wins and two losses; they scored 158 runs in the season. Via Elegante came in second; Mike Hamm’s guys finished up with four wins and six losses. Bank of the West came in third; Rich Hagerty’s players had three wins and six losses. Only 13 runs separated the total runs scored by all three teams.

Winter Season is underway. Everyone is invited to head over to our softball stadium to cheer on your friends and neighbors as they battle for first place in their leagues. Games are played starting at 10:00 a.m. every weekday; Wednesday is practice. If you have any questions about softball, please call Ed Cussick at 818-0194.