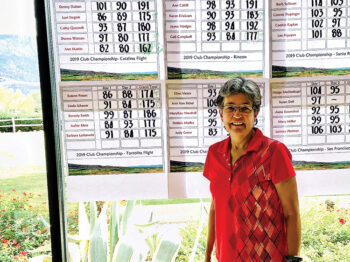 Ann Martin, a friendly, feisty, but not-too-fierce mountain lioness, climbed to the top of the Catalinas with her win of the MountainView/Preserve Women’s Golf Association (MPWGA) 2019 Club Championship. Thirty-one women in six flights, all named after Arizona mountains, traversed the Preserve Golf Club on Nov. 4, and MountainView Golf Club on Nov. 5 to see who would reign as Queen of the Hill for the next year. During the 36-hole, low gross tournament, the perfect weather peaked in the low 80s, Ann’s two-day scores were 82 and 80, and one might just say that she likes golfing in the 80s. Not one to make mountains out of molehills, Ann modestly tributes her seat at the summit to hitting the ball straight, her back being in a cooperative mood, and that Janey Clausen, 2012, 2015, and 2018 MPWGA Champion, was out of town. We sing praises to Ann, as obviously, there ain’t no mountain high enough, and with this big win under her belt, she has likely crossed a little hike up Mt. Everest off her bucket list. Way to go Ann – in the zone, and on the throne!

Closest to the pin winners on the green flat lands on Day 1 at the Preserve were: No. 4 Ann Van Sickel, No. 6 Jacque Twitty, No. 11 Lori Stegink, and No. 14 Mary Kay Nordhill. On Day 2 at MountainView: No. 4 Ann Martin, No. 8 Linda Schauer, No. 13 Barb Laskowski, and No. 17 Lan Nguyen. These flag-flirting pin-pals were awarded enough pro shop credit to buy a few sleeves of lucky balls, hopefully pre-programmed to find their way to the hole on the first stroke so as to eliminate any future fuss and botheration with measuring tapes, putters, and other such nonsense.

Ann Martin, the woman who moved mountains and owned the courses, topping the chart with a two-day total low gross score of 162, received a cheese board, leather picture frame, and $125 in pro shop credit. This petite, top-of-the-hill, but definitely not over-the-hill spunky, spirited golf enthusiast will soon be sporting some spiffy new golf duds. She scored low to win, but that’s not worth a hill of beans compared to how high she scored in settling in SaddleBrooke with her husband, Guy, ten years ago. Ann loves our courses, commends our golf staff and management, and cherishes her gal-pal golf time.

When asked what the view from the top of the MPWGA mountain looks like, Ann spoke of the great fun she has had golfing in the league on Tuesdays, particularly enjoying the mix and mingling of the group each week. She loves the camaraderie, both on the course, and at the 19th hole, and is a very active participant. Ann is our current MPWGA Rules Chair, coordinates many of the special events including the Robson Challenge, has previously served as MPWGA President and Vice President, has won our President’s Cup Tournament, and is on the Executive Board of Arizona Golf Association (AGA). Perhaps the most remarkable thing about Ann’s golf, during casual, friendly social rounds, is her extraordinary ability to talk before, during, and after her golf swing while still maintaining perfect focus and hitting her ball square.

We thank our long-time tournament sponsors, HealthySkin Dermatology, for their continued loyalty and support. An entire team load of appreciation to our Club Championship Chair, and current President of MPWGA, Janey Clausen, and her predecessors, who designed the tournament so that every member of any handicap index has the opportunity to participate, play competitively, and place. A 19th hole bowl of tasty treats to Matt Hudson, Director of Golf Operations, and Mike Karpe, Assistant Golf Pro, for their continued time and contributions to our events. They are a colorful candy sack full of fun, and have fondly been called “The M&Ms” because they work so hard for us, but never melt under pressure. A round of applause to Ralene Peters and Lori Stegink who braved the front of the room as they presented awards and prizes. We celebrate the Marvelous Ms. Martin for her Club Championship win, her dedication, and contributions to the MPWGA, and her unmatched gift of golf gab, which gives the rest of us a lot to talk about!