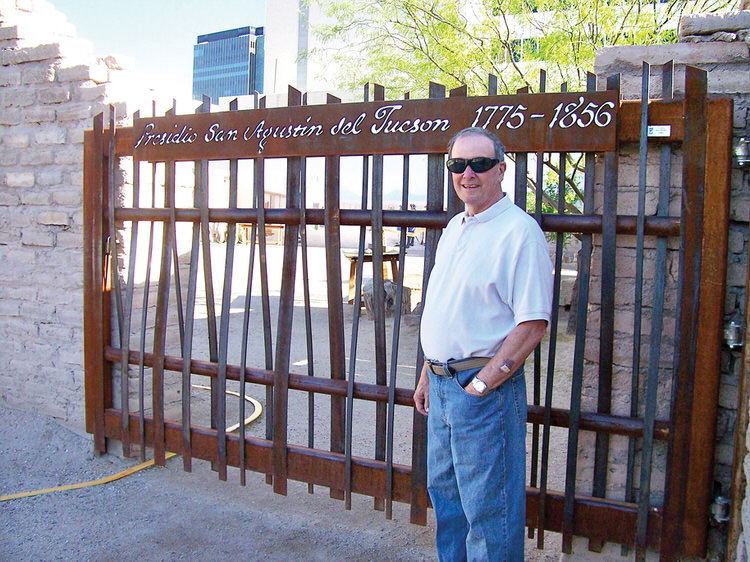 Allen Kienitz was a kind, encouraging person who always had a story to share and a twinkle in his eye. Fond of wild suspenders that often matched the season, bright tropical shirts in the summer, and a notable sweatshirt collection for the winter, he displayed this sartorial splendor as he carried out daily tasks at home and in his volunteer activities in the SaddleBrooke community.

Allen grew up in Minneapolis in the Tower Hill neighborhood in a typical Midwestern family. His dad worked for Hennepin County and headed up the social work department before retirement. Mom took care of the four kids and the home. While his three older siblings graduated from University High, Allen went to John Marshall High, where he met several life-long friends. He also got some hands-on work experience through summer jobs surveying for the road department and working as an orderly at a local hospital. This helped him narrow his career choices.

Allen won a scholarship for college and graduated from Harvard, a fact he only humbly acknowledged. He also served in the Army Reserves and was activated during the Berlin crisis, serving as a cryptologist. He married and moved to southern California, where he worked in industrial sales and marketing, while raising three children and supporting their activities including Little League. Allen loved the outdoors, often backpacking and hiking in the San Andreas Mountains.

After the kids grew up, Allen and his first wife divorced, and he moved to a new firm, where he developed their medical sales department. When the company, based in Illinois, offered him a promotion, Allen moved to the Chicago area.

He met Marge at a Christmas party in December 1990. She was there because some friends were determined to fix her up with a date. Marge was a professor of Nursing Education at Elgin Community College. The two hit it off, got engaged in 1991 and married on Valentine’s Day 1992. Marge’s sisters teased Allen that he married Marge because he liked the house she’d purchased in Winfield, Ill., shortly before they met. They lived in that home until they moved to SaddleBrooke in 2009.

Meanwhile, as often occurs, life threw the newlyweds a curveball. Allen’s company suffered some reverses, and he was downsized. So, he went back to school and got a master’s in teaching. Allen then began a second career as a full-time substitute teacher, covering kindergarten through 12th grade. Meanwhile, Marge and Allen engaged in their love of the outdoors and travel, first tent camping and then buying a Road Trek RV in 2000 because they were tired of sleeping on the ground. When Marge and Allen both retired in 2003, they began travelling all over North America, including much of the Southwest, including visiting his brother and sister-in-law, SaddleBrooke snowbirds David and Eilene.

After the death of Marge’s mom in 2007, the couple now had no reason to stay in Chicago, so they began evaluating what’s next. SaddleBrooke had what they were looking for, and they found the house in 2009. Once they got settled, the couple began exploring new activities and hobbies. They both took classes and joined the Art Guild. Allen found a niche there and served as Guild treasurer for several years and volunteered for the art shows, often providing background support.

They continued travelling, both at home and overseas, and added to their ever-expanding art collection. After touring the Oro Valley public arts program, Allen raised the idea of installing public art in SaddleBrooke. To that end, he joined SaddleBrooke One’s long-range planning committee, where he served for several years and helped to spur on the installation of wall art on Ridgeview Boulevard.

Allen was a news junkie and read the daily paper and watched several evening news programs. He was a great reader, told wonderful stories, and decided he wanted to learn to cook once he retired. He soon took over most cooking duties at home and enjoyed trying out new recipes, hosting dinner parties, and bringing interesting dishes to neighborhood gatherings. He was also known for his evening walks with Bella, their beloved papillon, on the cart path at SaddleBrooke Hole Two. “She’s the best thing we ever did for ourselves,” he once remarked about Bella.

Allen succumbed to a short, non-COVID illness, in December 2020 and is survived by his loving wife, Marge.

Other surviving family include Allen’s son, Tony, and wife, Tanna, and their children, Cara and Jackson; daughter Stephanie Ells and husband, Mike, and their children, Jake and Ben; son, Carey, and wife, Kelly; and sisters-in-law, Mary and Eilene Kienitz. Allen was preceded in death by his parents, Helen and Edward Kienitz, brothers David and Martin, and sister Linda Jensen.

While no memorial services are planned, Allen’s ashes will be interred later this year. He is deeply missed by family and friends.