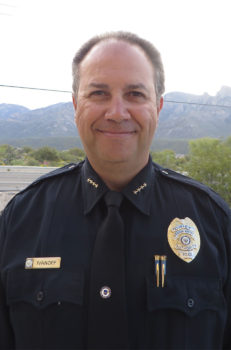 The Resurrection Church Men’s Breakfast group heard from one of its own in April when the group was addressed by John Ivanoff, Chief of Public Safety at the Tucson International Airport. John and his wife Julie are members of the Church and John is chair of the Resurrection Church Safer Campus Ministry Team.

An obviously intelligent yet humble fellow with an unmistakable command presence; one would be hard pressed to find someone with more impressive law enforcement credentials. John joined the Tucson Police Department in 1986 after he had graduated from the Arizona Law Enforcement Training Academy. Two years later he joined the Tucson Airport Authority Police Department, starting as a patrol officer. There John steadily rose through the ranks and was appointed Chief of Police in 2008 and Chief of Public Safety in 2012. In his current position he oversees both the police and fire fighting divisions at the Tucson Airport.

In addition to his responsibilities at the Airport, John helped found the Pima Regional SWAT team and serves on its governing board. He serves as First Vice-President of the Airport Law Enforcement Agencies Network, a nation-wide organization dedicated to airport public safety; and he is the Vice Chair for the Southern Arizona Law Enforcement Managers association. John is also a member of both the Arizona and International Associations of Chief of Police.

A third generation native Tucsonian, John graduated from Palo Verde High School and attended Pima Community College and the University of Arizona. It was while they were in high school that he met Julie, and on April 8 they celebrated thirty years of marriage. Their two children, a son and a daughter, are now grown. The son attends Arizona Christian University in Phoenix, where he plays baseball, and their daughter works for a consulting firm in Dallas. Julie, by the way, is the daughter of retired Pastor Roy Guinn and his wife Marge, long-time residents of SaddleBrooke.

The Resurrection Church Men’s Breakfasts take place the first Saturday of the month for the months October through May. Meeting place is the Outreach Center at the main campus in Oro Valley. Time is 7:30 a.m. There is always an interesting program and the group is adjourned by 9:00 a.m.

The breakfasts are organized by a five-member steering committee; and four of the five members of the group, Duane Hartzler, Ron McNutt, Al Toensing, and Gary Zellinger, live in SaddleBrooke. Any SaddleBrooke resident interested in attending may freely contact one of the committee for further information.

Resurrection Church at SaddleBrooke holds its all-denominational Sunday worship service at 10:00 a.m. in the Vermilion Room of the SaddleBrooke One Clubhouse. All are welcome.