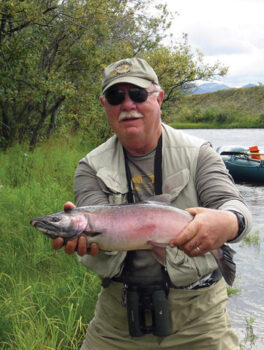 In his presentation to fellow members at a recent SaddleBrooke Fly Fishers Club meeting, Jim Smith described his adventures fishing the Kisaralik and Kwethluk Rivers in the Bristol Bay Area of Alaska. The trips were supported by Papa Bear Adventures in Bethel, Alaska. It was there that Jim and his buddies were taken up river in two small seaplanes and dropped off to enjoy their 10-day adventure floating 60 to 80 river miles.

Once the seaplanes left, the anglers were on their own in the wilderness with two rubber rafts, camping equipment, fishing equipment, maps, and food. The views were amazing, the fishing wonderful (at one point all five guys had a silver salmon on at the same time), and the occasional huge bear track (and even an actual bear) sightings kept them on their toes. The silver (also known as coho) salmon, Arctic char, and rainbow trout caught were mostly released, but as there were no grocery stores on the trip, the guys typically kept two to three fish each night for their protein intake.

Navigating their way down the river was sometimes challenging, as maps can’t keep up with ever-changing waterways. The two boats almost lost each other in the braids of the river but, fortunately, reconnected before nightfall. There was also one waterfall area, which they passed via a combination of portage and lowering the boat over the rocks with ropes.

In the end, the adventurers were ready for the jet boat’s arrival at the meetup point but sad their time on the river was over. They clearly understood that, in the end, it is better to have memories, not dreams.

The SaddleBrooke Fly Fishers usually meet on the fourth Monday of every month at 4 p.m. in the Catalina Room next to the Mesquite Grill at SaddleBrooke TWO. The January meeting will likely be different, so if you’d like to attend, please email us at [email protected] for the latest info. We enjoy catching up with each other and hearing interesting presentations from both other members and outside speakers. All SaddleBrooke residents and their guests are welcome to attend.