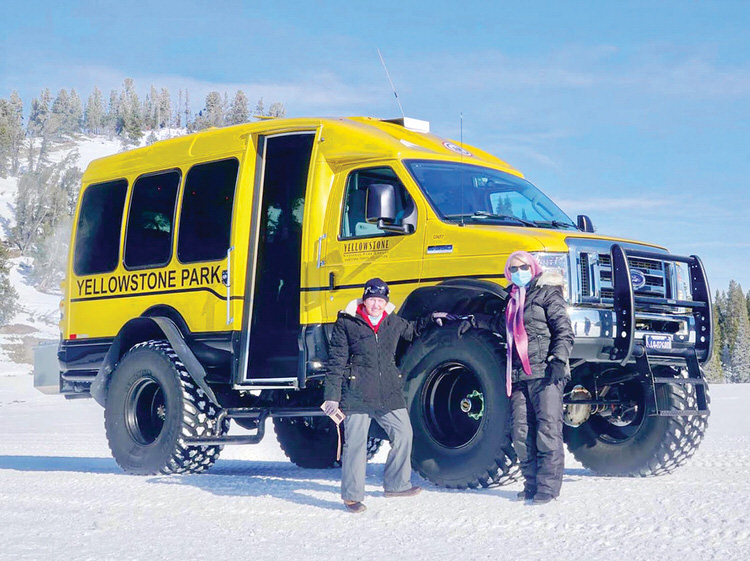 Transportation and sightseeing are provided by the park service with their modern, high-clearance, yellow buses. (Photo by Bernie Nagy) 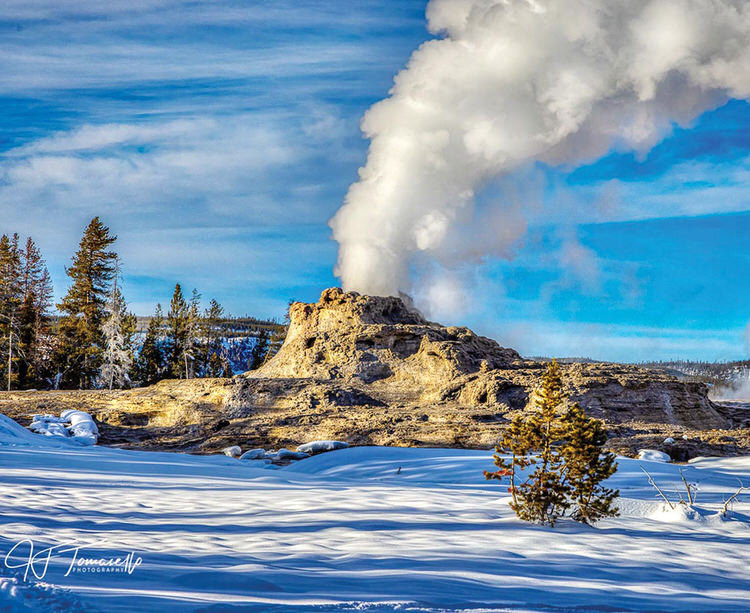 Castle Geyser has an ancient cone resembling the ruins of an old castle. It has a very impressive eruption, with steam shooting 200 feet into the sky. (Photo by Joe Tomasello) 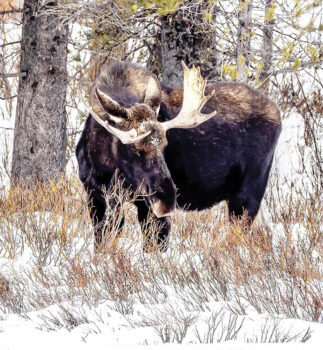 A bull moose searches for foliage under the winter snow. (Photo by Joe Tomasello) 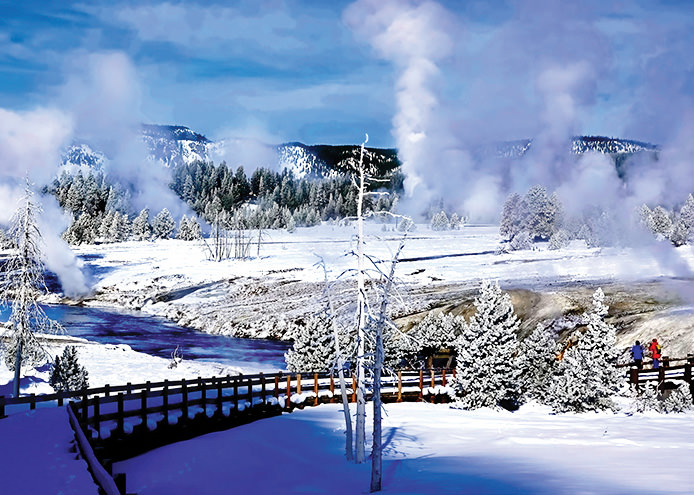 SaddleBrooke photographers Bernie Nagy and Joe Tomasello experienced a once-in-a-lifetime winter photo safari in Yellowstone, along with their spouses Linda Nagy and Mary Tomasello. The four flew from Tucson to Bozeman, Mont. and then traveled by rental car to Gardiner, Mont.

They entered Yellowstone through the massive Roosevelt Arch, which was constructed in 1872, and drove on to Mammoth Hot Springs to photograph the many steaming travertine terraces.

After three nights exploring Yellowstone National Park from Gardiner, they parked their car at Mammoth Hot Springs and took a Yellowstone coach, with its monstrous wheels, for a five-hour trip on snow-covered roads to Old Faithful Snow Lodge. The knowledgeable driver made several stops during the journey for passengers to get out and take photos of nearby wildlife and scenic areas. The tour passed Indian Creek, the lacy-appearing Gibson Waterfall that drops over the edge of Yellowstone Caldera, the Norris Geyser Basin, and on to Madison Junction. The route continued through the Lower and Midway Geyser Basins and ended at the Old Faithful Snow Lodge for several overnight stays. From there, it was only minutes on foot to the iconic Old Faithful Geyser.

Traffic is minimal throughout central Yellowstone in winter. Only high-clearance snow coaches are allowed from the north entrance to the interior of the park in the wintertime, since most roads are closed until the end of May.

There are numerous thermal features near Old Faithful. The Castle Geyser that blows steam over 200 feet into the air and the colorful Morning Glory Pool are popular sites for photographers.

Walking along icy boardwalks trails, the four visitors marveled at the various thermal features. Bison, covered in snow, wandered close by, and a flock of honking trumpeter swans flew low overhead. With frosted trees, rising plumes of smoke, hissing sounds from erupting geysers, and gurgling sounds from the thermal pools, it truly was a winter wonderland. On several mornings, the temperature was less than -20 degrees!

After returning to Gardiner, the four travelers ventured again into Lamar Valley for their best day of wildlife viewing. Bison and large elk bulls were standing along the road, and large herds were feeding and resting in nearby meadows. Bull moose were spotted along the edge of the snow-covered forests. Eagles perched in the trees, and coyotes were heard howling in the wind. Pronghorn grazed at a close distance, and bighorn sheep leaped on a steep, rocky ledge. Along the Gardiner River, hundreds of elk filled the pastures.

Yellowstone is a magical place in winter, and it feels as if one has the whole park to explore on his or her own. Year-round residents include 22,000 elk, 5,000 bison, and nearly 100 wolves roaming the park. The Yellowstone and Firehole Rivers in the park, warmed from nearby thermal pools, welcome hundreds of waterfowl, including ducks, geese, sandhill cranes, and elegant trumpeter swans. To visit Yellowstone National Park during the winter months, one must plan months in advance, even though the number of tourists in winter is only three percent of the four million who visit during the summer season.