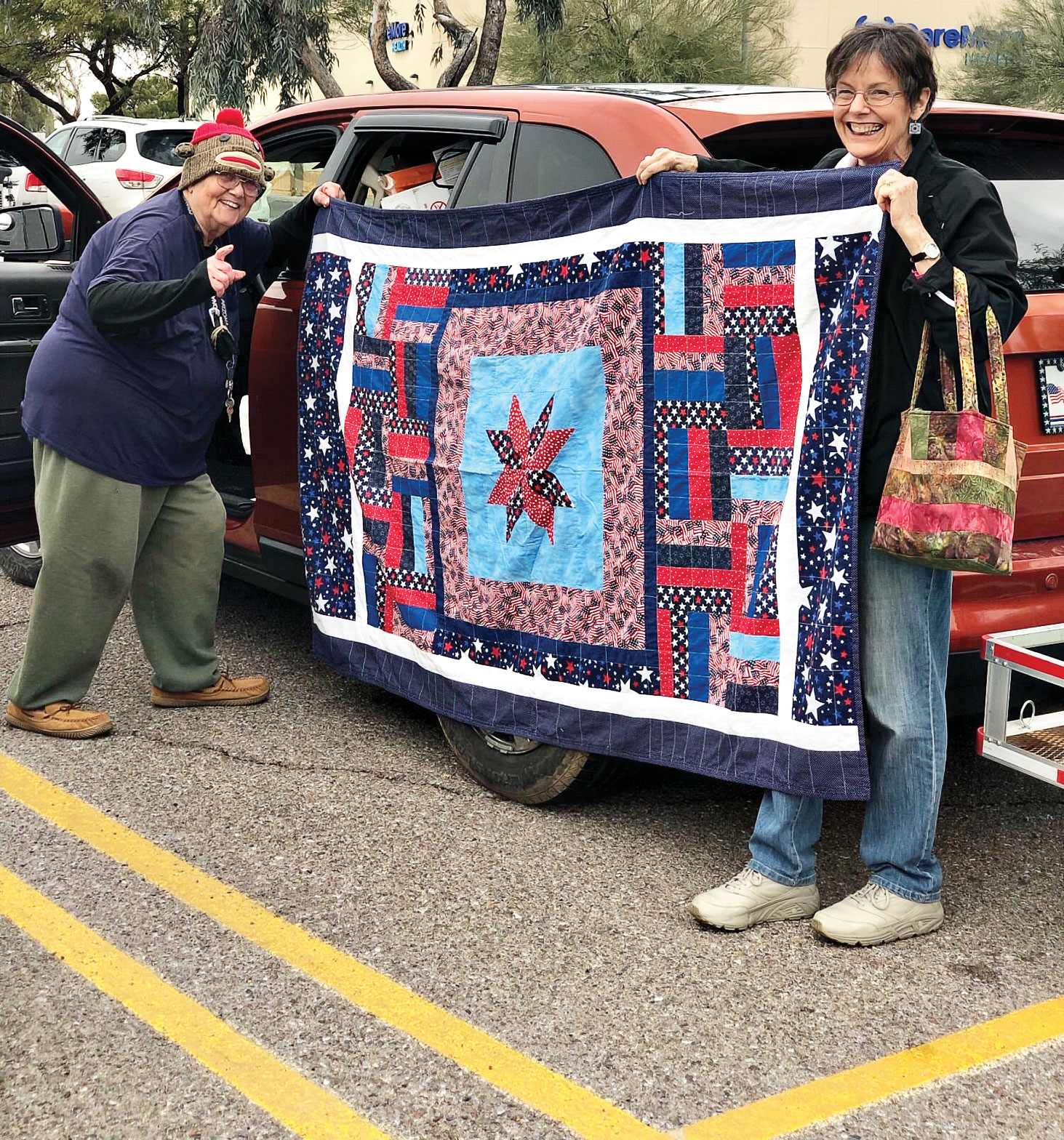 Sammy, Tina and the comfort quilt.

Sammy was calling to thank them for the comfort quilt she was given on her discharge from the VA hospital in October 2018. Her life was really down and the quilt meant so much to her, giving her hope for the future. All Sammy knew was that the quilt label on the back of the quilt said “Thank you for your service. SaddleBrooke Friday Quilters 2017.” She tracked down Tina and Debbie who then went to meet Sammy. They met this most amazing person.

Meet Sammy Miller. Sammy now lives in Sierra Vista, AZ. Her life story reads like a mélange of multiple people because it’s hard to imagine one person accomplishing all she has done. Sammy has Masters degrees in science, education and special ed. She was crowned Miss St. Petersburg. Sammy was an Olympic swimmer, a marathon swimmer (having swum from Florida to New York) and she dove with Jacques Cousteau. All this before getting to her professional accomplishments!

Sammy worked for an oil company in the 1960s as a translator. She’s fluent in ten languages. She served as a Red Cross Director. Her work and travels have taken her to 38 countries. Sammy has also been a school teacher and a principal in several schools in southern Arizona. She started a horse for therapy program for children.

In early 2018 Sammy developed intestinal problems and injured her leg. In September 2018 she was hospitalized for gangrene in her leg. A month later when she was discharged the hospital concierge said to her, “You’ve been here so much, I’m going to give you one of the good comfort quilts.” And the connection with SaddleBrooke Friday Quilters came to be.

Recently Sammy’s house burned down. While her insurance coverage is covering rebuilding, she’s living in her car along with her dogs Blessing, Faith and Daisy May. Blessing and Faith are Weimaraner dogs and they pull Sammy’s wheelchair. Daisy May is a smaller dog. Nothing will shake Sammy’s faith and optimism that there is always another opportunity waiting for you just around the corner.

SaddleBrooke Friday Quilters members make and donate quilts to local hospitals, hospices and other charities for distribution to people in need of a warm hug.