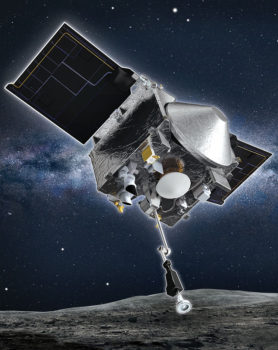 OSIRIS-REx is NASA’s first mission to collect a sample from an asteroid and return it to Earth for study and it’s being led by the University of Arizona, right here in Tucson. Join Unit 32 on November 26 for a presentation and Q and A with the Mission’s Deputy Communication Lead, Christine Hoekenga to learn more about this intrepid, hometown mission.

The OSIRIS-REx spacecraft launched in September 2016 and has since traveled nearly two billion kilometers (1.2 billion miles) en route to its destination: a carbon-rich near-Earth asteroid called Bennu. At about 500 meters across, Bennu is an ancient space rock that scientists believe contains organic molecules dating back to the formation or our Solar System 4.6 billion years ago. Bennu is also classified as a potentially hazardous asteroid, meaning that there is a small chance (about one in 2,700) that it could collide with Earth in the next couple of centuries.

In August, OSIRIS-REx caught its first glimpse of the asteroid as a point of light, blinking across the sky 2.2 million kilometers (1.4 million miles) in distance. In December, the spacecraft will officially arrive and start surveying Bennu up close with a suite of five scientific instruments. One of them, the camera system that acts as the eyes of the spacecraft, was also designed and built at the University of Arizona.

Between now and December, as this tiny, unexplored world comes into clearer focus, we all will begin to learn how accurate Earth-based predictions were about its shape, size, behavior and composition. All the data collected as the spacecraft approaches and surveys the asteroid will ultimately help the University of Arizona-led science team select the best location to collect a sample of material from the asteroid’s surface. The data will also help to understand asteroids overall and refine predictions about whether Bennu (or other asteroids) actually pose a risk to Earth.

In a presentation by Christine Hoekenga, she’ll explore questions like: Of all the asteroids in the Solar System, why was Bennu selected? How does a robotic spacecraft go about studying an asteroid no one has ever visited or even seen up close? How will OSIRIS-REx collect and return a sample of the asteroid to Earth? What do researchers hope to learn by doing so?

Come to the presentation and Q&A with Mission’s Deputy Communication Lead Christine Hoekenga on Monday, November 26 from 6:00-7:30 p.m. at the SaddleBrooke One Activity Center.