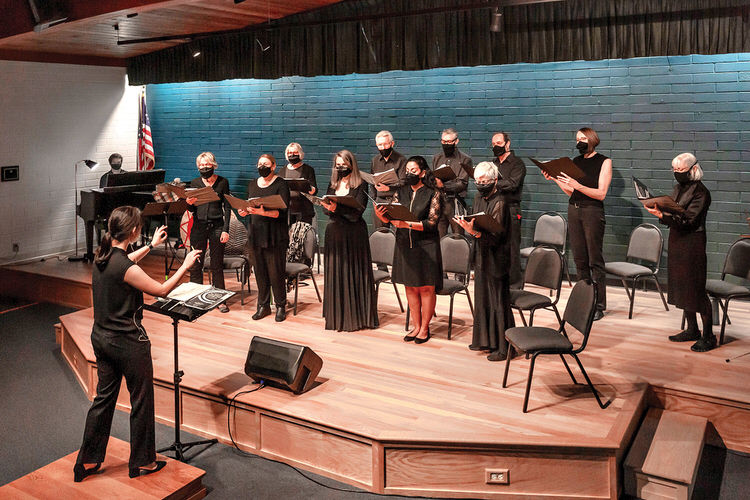 Quietly tucked away in Oracle, a gem hiding in plain sight in the desert, is a musical venue providing live entertainment performed by a wide variety of musical artists. The Oracle Piano Society is in Oracle on the side of American Avenue, opposite the public library, just 15 minutes from the SaddleBrooke Ranch entrance and 20 minutes from the SaddleBrooke entrance, both on Highway 77. The Oracle Piano Society features a lineup of internationally renowned musicians in an intimate setting. These musicians have included legendary classical pianists Jerome Lowenthal, Alexander Korsantia, and Ursula Oppens, to name a few. The Oracle Piano Society also presents leading musicians from other genres as well. Last season, concerts also included performances by the president’s own United States Marine Band jazz pianist Anna Maria Mottola, the Society’s own Voices in the Oaks Chorale, an African drummer ensemble, Native American flutist R. Carlos Nakai, a classical guitarist, music from popular movies, and occasionally concerts from some local conservatory students and professors.

In spite of the pandemic, the Oracle Piano Society has continued to adapt and present exceptional performances, both outdoors and indoors, guided by CDC recommendations. Prior to March 2020, the Oracle Piano Society typically hosted about 12 concerts per season, art exhibits, art classes, and weekly Voices in the Oaks Chorale rehearsals, all held at their beautiful Oracle Center for the Arts located at 700 E. Kingston Street.

The Oracle Piano Society was a professional dream of Dr. Stephen Cook after completion of his doctorate from Arizona State University in 2012. Dr. Cook would often visit Oracle because his wife’s parents were, and still are, residents of Oracle. Learning of the vibrant artist community and charmed by the beautiful high desert, Dr. Cook envisioned Oracle as the perfect spot where he could develop a musical arts organization to host world-class musicians and educational programs.

In June 2012, the society board began holding organizational meetings at the Oracle Fire Department. The first performance was held at the DesertView Performing Arts Center at SaddleBrooke TWO on Nov. 30, 2013. In June 2014, the Arizona Opera company donated a seven-foot Baldwin grand piano, which had to be stored. Permission was given to store it at the Oracle Masonic Lodge. Three concerts were held at the Masonic Lodge in October, November, and December of 2015. With the help and generosity of the community, the board was able to raise money toward the purchase of the lodge, which was finalized on Jan. 19, 2016. Because of the need for repair, the community stepped up again. People and businesses volunteered to make improvements and renovations to the new venue, including a new stage, more lighting, a sound system, and a new HVAC system. Work was also completed on the donated Baldwin piano, which now had a home. The Oracle Center for the Arts was born.

The board is planning to resume a chamber music festival in the 2022-23 season. The board also plans to expand the campus to include an outdoor amphitheater and, eventually, dormitories and practice and teaching spaces on site.

Many SaddleBrooke and SaddleBrooke Ranch residents have already enjoyed extraordinary concerts at the Oracle Center for the Arts and have given their support for this non-profit organization. For more details about upcoming events, go to www.oraclepianosociety.org. The Oracle Piano Society is a true gem in the desert.