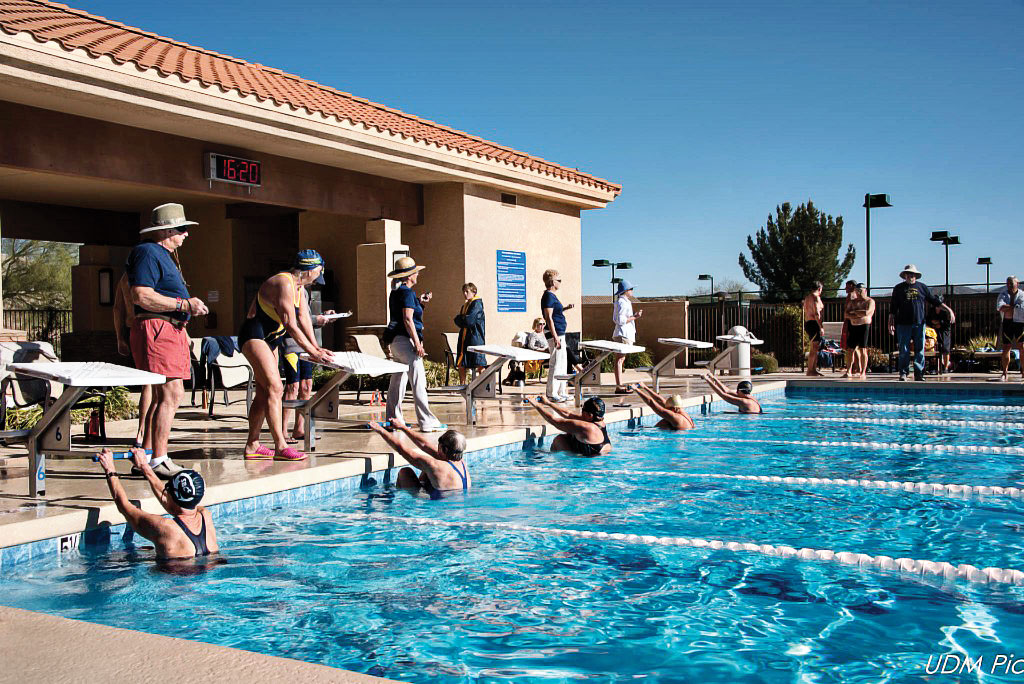 The SaddleBrooke Swim Club held its annual Intra-Squad Swim Meet on March 2, at the DesertView pool. The weather could not have been more pleasant as the club came together for some friendly competition. Each year the club splits its members between two teams headed by a different couple of coaches each year. This year’s coaches were Debi and Steve Truesdale. These two were also the coaches last year when Debi’s team was victorious. This year the tide was turned and harmony was restored to the Truesdale home as Steve’s team came away with a close victory. The competition was neck and neck until after the midway point where “Team Kanaloa” pulled away and never looked back. Team Les Bon Champion Ichthyosaurs put up a valiant fight and was most gracious in defeat in spite of some calls for a recount. This meet is a great way for those new to the aspect of competition to get their feet wet, so to speak. There are those who have raced most of their lives as well as many racing for the first time. Actually, there are quite a few who have recently joined the club through the Let’s Swim Clinics that are hosted by the club, free of charge, to help SaddleBrooke residents improve their ability to swim, allowing them to swim, whether for fun or exercise, with less effort and more efficiency. Many who have gone through the clinics end up joining the “Team” for competition as well, although this is not a requirement. A new clinic started on March 27. For more information on the clinics, contact [email protected] After the competition, the Social Committee provided a delicious and nutritious lunch spread that was enjoyed by all. Next year the friendly competition will continue and many good times will be had once more. BTW there is a rumor that next year’s coaches’ initials are J and M, a fine couple.