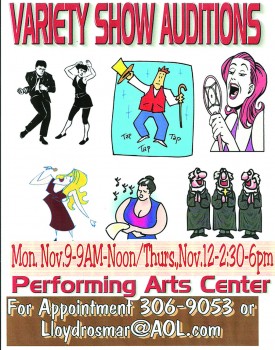 It’ll be a true variety show; it’s not a book show where actors follow a set script.

Performers may do whatever they wish, be it singing, dancing, playing a musical instrument, comedy routine or snake charming, etc. as an individual or group act.

It’ll be like the Major Bowes radio show (are there any readers old enough to remember Major Bowes?) Or the Ed Sullivan Show or the current America’s Got Talent TV show

For those interested in participating, decide what you do best and request an audition.

Rehearsals will be on Mondays and Wednesdays, January through March.

A show that is really a show

Sends you off with a kind of a glow.

And you say as you go on your way